In this installment of Free Comic Inside I was planning to return to Cybertron and the Unicron Trilogy, but by going into Dreamwave’s run of Transformers Energon comics. However, I just remembered another bunch of stories featuring the Mini-Cons that would work for our little mini-comic review series, or at least the Microns. “Micron” is the Japanese name for the Mini-Cons because they like to be special or something, with Transformers Armada instead being called either Micron Legend or Legend Of The Microns depending on the translation. I discussed this back during the Many, Many Intros Of Transformers.

For the first run of Micron Legend DVDs the distributor added two extras. Each DVD came with a special Mini-Con repaint, creating a whole new character exclusive to that first run. They also came with the miniseries “Linkage”, a three to four page mini-comic that told the stories of these exclusive Mini-Cons. They formed teams just like the regular Mini-Cons and make a human ally as they wake up and do battle with each other. The series was written and drawn by fan-turned-creator Hirofumi Ichikawa, but the story was never translated for Western audience. We in the US got full season box sets for the regular series and the “Unicron Battles” season for example. No minicomics for us, but luckily for this series Greg “M Sipher” Sepelak, a fan who has also gone on to do official Transformers tales in magazines and books (reviewing fans may also recognize him from the YouTube series The Isle Of Rangoon as the puppeteer behind Sunny Jim as well as playing Jim’s human roommate) made contact with Ichikawa getting his script and notes on how the characters should be written. These were handed off to Transformers fan and comic editor/translator for Antarctic Press Doug Dlin, and together they produced the translation I’ll be using.

With such a small page count among the thirteen issues I’m doing this in two parts, issues one through six today and seven through thirteen tomorrow. Sadly there’s no way I could find to divide them equally and this is ultimately what I chose to go with. In order to read them (at least in this translation) I had to go to the Internet Archive, so read along on this lost Transformers adventure and lets see if Ichikawa does a better job with the Mini-Con gimmick than the cartoon and other comics did. Note that each paragraph represents a different issue. 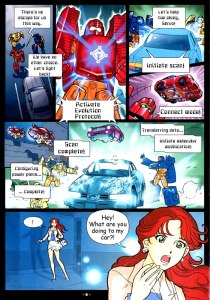 That’s not what they mean by a convertible, guys!

The story starts somewhere on the US West Coast as the Super Stunt Team–Servo, Redline, and Flat-Out (a rare example of Japanese Transformers with Transformer-sounding names, or so it feels like to me) being chased by a set of drones they assume are hunters sent by the Decepticons to track down awakened Mini-Cons. In case you don’t remember from the cartoon continuity these comics take place in, the Mini-Cons/Microns sealed themselves in panels to survive their crashing ship and until the series starts remained in status. Now they either emerge on their own or have to be awakened by the Autobots, and their human allies, other Mini-Cons, or the Decepticons. Since being hunted is rarely fun Redline turns a nearby car into a cannon and blows them up…though they probably should have asked the human woman for permission. This does play into the Mini-Cons turning parts of the Autobots and Decepticon’s own bodies into weapons, the only part of the gimmick the show actually uses, and expands on it to show it isn’t just the larger Transformers that can be modified that way.

The woman’s name is Stella Holley and somehow the Super Stunt Team make a psychic link with her. I guess this is trying to explain how the Street Action Team could communicate with Rad, Carlos, and Alexis, the three main humans of the series, but that was explained as their being there when the Mini-Cons awoke, at least in the US version. She offers them a place to stay at her house. The Mini-Cons explain to Stella (when Servo isn’t going through her laundry for the obligatory lady underthing gag) how they managed to grab a few panels before trying to escape the ship, only to be knocked into stasis for four million years (a popular nap time for Transformers after a ship crash). That would be the backstory for our heroes. Meanwhile a mysterious Mini-Con hunts down another survivor and is the one behind the drones, who blast the Mini-Con and store him in a strange new form of panel.

Between issues Stella and the Super Stunt Team awaken or meet up with another Mini-Con, Rollbar, and find a spaceship meant for the larger Transformers. Rollbar decides to investigate though Redline is reluctant to let him since he just came online. Flat-Out agrees to join him. Redline tells Stella the Mini-Cons just want a place to live in peace and asks if she’ll be a go-between with the pilot, but she’s worried it might be a Decepticon. If that’s the case, take the teleporter and run, but it’s destroyed by the mystery Mini-Con, who now has a buddy. These are Top Gear and Midship, members of the Speed Chaser Team. They believe that the Mini-Cons should be out there as part of the Autobot/Decepticon war and they have no problem with reprogramming Mini-Cons to think like them. We’ll later learn they work for Unicron, who is using the war to feed off of and gain power in this continuity, and the Mini-Cons were part of that plan. Meanwhile another Mini-Con is waiting for Rollbar and Flat-Out.

The Speed Chasers are joined by the captured Mini-Con from issue #2. This is Top Gear, and he’s now willing to help reprogram Mini-Cons, including our heroes. He attacks Servo, which angers Redline. Flat-Out sees the action and heads back to his team, but the Speed Chasers are stopped by Scavenger, which places this part of the story around the time of his secret arrival on Earth in the show. Rollbar is powerlinked with Scavenger, and having him linked to a warrior is enough to make Top Gear happy. Realizing they’re outclassed, the Speed Chase Team combine into their jet mode (the same combination as any of the “Skyboom” shield-forming teams) and get lost Since he doesn’t need the ship he agrees to let them have it and Rollbar leaves with Scavenger while Stella passes out.

Some of the issues also contain bios for the DVD exclusive teams. Even Stella gets her own bio.

Stella and the Super Stunt Team take the ship for their new base of operations, with Redline hoping Stella won’t be in harm’s way anymore. They also have one of the damaged “Fixer Bugs” and figure out that it is responsible for the reprogrammings. We also learn that Mini-Cons have a “servility program”, probably placed there by Unicron, who didn’t expect his minions to gain awareness and decide not to fight. Somewhere between pages Flat-Out went into a town and stumbled upon Falcia (well, the naming thing lasted longer than I expected), a jet Mini-Con that apparently doesn’t get along with Redline. She believes the only way Mini-Cons will live free again is by helping the Autobots crush the Decepticons and is just here for a member of her team, the Sonic Assault Team. She refers to the Super Stunt Team as “cowards” for not taking part, which is still better than the Speed Chasers. Also of note is that each member of the Sonic Assault Team are given exaggerated Earth accents, which remember is how Ichikawa suggested to the translators is how they should talk. Falcia is given a really bad Italian accent…or at least I think that’s what’s going on.

Stella gets mad at Falcia, who shrugs off the human’s opinion and head out. Boy is she going to be surprised if she does get to the Autobots. By the time this series is over they’re already working with five human kids and their parents before returning to Cybertron. She takes off with her teammate’s panel, with Stella calling her a “robo-b*tch”, which is hardly decent censoring but at least they remembered these were for kids. Stella reports back to Combusta (who decided she wanted a bad Spanish accent), but she’s attacked by the Speed Chasers…who apparently don’t know they’re going to get into the battle anyway or just think they should all go back to being mindless smart tools…except with a mean attitude. The Super Stunt Team go to help and chase them off but the panel Falcia took is broken.

Is that Mini-Con dead? Can Speed Chaser Team be stopped or will Falcia becoming a bigger jerk that she is now? Join us tomorrow for the exciting conclusion to Transformers: Linkage!