The Many MANY Intros Of Transformers: Armada/Micron Legend 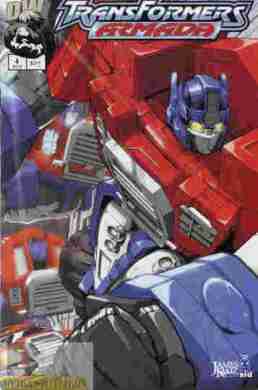 I’ve seen this one translated as “Micron Legend” and “Legend Of The Microns“, so I went with the shorter translation for the article title. Of course we in the US know it as Transformers Armada, the first of what’s been dubbed the “Unicron Trilogy”, three series intended to exist in the same continuity. I’ll come back to that in a few installments. The toyline debuted my favorite addition to Transformers toys and one I miss seeing…the Mini-Cons. These were a third faction of Transformers, about the size of a Micromaster, but able to combine with the larger Transformers, boosting their power and activating extra gimmicks. As long time readers know I’m also annoyed that they didn’t use the fact that they can also act as mounted weapons, armor, and other tools in any meaningful way in any of the media I’ve looked at thus far. And with the exception of manga and the rest of the young reader books I’ve pretty much looked at all of it by now.

Of course Japan can’t seem to be bothered to keep the US names so for them Mini-Cons are actually called Microns, which if memory serves was actually a measure of time in previous Transformers cartoons. At least they did Car Robots first and was intended to be a Japan-exclusive series like Transformers Go!, but I like Mini-Con better than Microns. They’re mini robots that connect to larger robots and occasionally each other into slightly larger robots or super weapons. Works for me.

Each show had their own name and their own intros and I’ll get more into that as we go along. However, let me warn you at the outset that no matter what the lyrics for Legend Of The Microns are, the intro is still way better than we saw in Armada. We have two intros for each country…depending on how you look at what we’re getting from Armada. Allow me to demonstrate.

Here’s the first US intro:

Yep, that’s how the show started for us. Eventually they changed it.

If you call that a change anyway. Same weak visuals, still no logo, just someone other than Rad (one of the human allies) doing the narration. These aren’t show intros. They’re more like those summaries anime often has at the beginning of the episode just being uses as the show intro. Did Cartoon Network just drop the actual theme in favor of their own intro? Well, given that’s what Toonami did at the time perhaps. I think this was later in the run, and that narrator would return for the final change.

Well, at least we have a logo. There’s no real difference between “The Unicron Battles” and the rest of the Transformers Armada line. A few characters got a new color scheme, supposedly a “powered up” form but nothing comes of it outside of Megatron now calling himself Galvatron and since this is supposed to be the same guy he’ll keep going back and forth between Megatron and Galvatron with each new upgrade. It’s kind of bizarre. “Oh, G1 Megatron was rebuilt into Galvatron, so that must be a Megatron thing. Just like when we kill off Optimus Prime and bring him back from the dead.” At least they stopped the Galvatron thing eventually. I also found this:

However, if that’s an actual intro I never saw it. Again, it could be Toonami’s fault. Maybe some of you international fans saw it but I don’t remember it from the DVDs. I’ll have to rewatch those. And still no logo, but a few different YouTube accounts had it and I had to dig through them to find the ones I know. It’s also way too long considering it’s just shots of everyone transforming and shooting guns at nothing. I does look like the animation of the closing credits though. Actually there appears to be at least four different versions of the original intro and two of the “Unicron Battles” but I think you get the point. So enough of the US intros, let’s see how Japan did it better.

See, they worked in the narrated bits and still gave a good looking intro! And yes, this was the best copy that came up in my search. Outside of the brief moment where they decide to switch music styles (the first few seconds sounds more like metal while the rest is more rock or at least a different tone of metal) the song is better just for actually being one rather than an instrumental occasionally saying “Transformers”. I wonder how the lyrics to Psychic Lover’s “Transformer: Dream Again” go?

Transformers, take flight with those wings…

(Transformer)
Even though we looked up to see how beautiful the sky was
(It’s Too Late!)
Destiny draws near as the siren echoes
Get It Out! Boy, you’ll become a warrior
~More Than Meets The Eye!~

So far getting the theme songs to be about the Transformers has been a chore but this comes closer than most of the others we’ve looked at thus far. I like the song overall though. This was around the time when giving a show more than one intro even in the same season was becoming popular so we got another intro half way through without their own “Unicron Battles” style division.

Can we combine these visuals with “Dream Again”? Because I liked that song much better but these visuals better. Sure it just a lot of transforming with a few hints of battle, but it’s more dynamic and alive than the other one. Also interesting that they’re using the old G1 logo from the US when Hasbro was already on their fourth “Transformers” logo at the time. (I’m referring to the “Transformers” itself and not the subline name. The Unicron Trilogy toys had the same version used in the previous Robots In Disguise and Universe lines.) The song here is called “Transformers–Steel Courage” by Hideaki Takatori, who was also the composer and writer.

The steel courage shines
Basking in the radiant light
Spinning off into the galaxy
Begin the journey, Transformers

In spite of this wandering fragility
It’s time to search for kindness
Something within you starts to change
Transform!

The steel courage shines
Basking in the radiant light
Spinning off into the galaxy
Begin the journey, Transformers

Fight, legendary heroes!
Embrace these overflowing feelings
One day this sky will be full
Be triumphant, Transformers

Okay, closer to what I’m taking about. Japan’s show lyric style is a bit different from ours, but at least this feels like it’s about the Transformers and their war specifically. I’ll take it! Especially over the lame intros of my part of the world.

Unfortunately this show had a lot of issues and not all of it can be blamed on the US rushed schedule as Hasbro wanted to get their toys out by a certain time and Cartoon Network wanted the show fast. Translation errors abounded. At least a quarter of the Mini-Cons were all called Leader-1 at some point (the name Hasbro gave to Megatron’s partner Mini-Con as a “@#$% you” to GoBots fans–they’ve pulled a few stunts to keep their old rivals from finding a new home with a different company), dialog was pathetic, and the animation was terrible. Not that Japan cleaned the animation up a whole lot, just a bit better than Armada. It was only the beginning of all the issues this series had on Cartoon Network, except for Animated but one of the producers was in charge of programming at Carton Network, as it had a terrible timeslot until it joined Toonami (much like the last two series after retrieving it from The Hub/Discovery Family). Between the Japanese animators and the US dubbers this show did not go over well, and even if they realized Mini-Cons could be more than power boosters and demonstrate that for the toy-buying audience I don’t think it would have helped.

Things will get worse production-wise as we continue through this trilogy but the intros will improve…for lack of a better term. You’ll see what I’m taking about next time with Transformers Energon/Superlink and after that with the final chapter of the Unicron Trilogy.