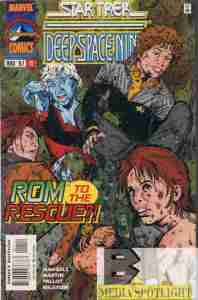 So in other words, they’re doomed.

“Four Funerals And A Wedding”

Continued from the previous issue: Doctor Bashir figures out that the creature is kidnapping women for their hormones, possibly to spawn. Rom and Deputy Etana go into the depths of the station, and while the creature captures her, Rom manages to free them all. The creature soon gets shot out into the wedding on the Promenade, where it overfeeds on Lwaxana’s hormones and dies. With the station now clear she is able to see through her financé’s ruse and calls off the wedding. She’s still married though…because Odo just happened to forget to file the paperwork for the divorce.

What they got right: Rom really gets to shine in this one. That thing took his fiancé and he’ll even tell Quark off to get her back. And yet he’s still Rom where it counts, meaning he gets to have a badass moment without rewriting the character or making it hard to believe he somehow regressed at a button push.

What they got wrong: The b-plot suffers a bit due to the lack of space. It’s not suggested until near the end that Ulos is just after Lwaxana’s money and only after the implants are destroyed in the course of events is she able to read that they planned to kill her off and take her fortune. It feels like a last-moment change to keep the show’s status quo regarding Lwaxana and Odo’s marriage in case the show went back to it.

What I thought overall: It’s a pretty good story, taking (as Bashir noted from the point of view of his time period) a classic sci-fi trope and giving it a 90s Star Trek tweaking. These two issues are worth looking at.