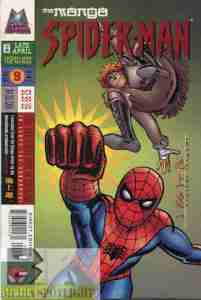 “I’ll get you once I’m done with this fourth wall!”

Spider-Man goes searching for Kangaroo, despite the taunts he gets from the city. Even the boy he rescued is stopped from thanking him despite the kid’s protests to his teacher. Our hero eventually catches up to Kangaroo but is at a disadvantage when he runs out of web fluid. When he finally gets the chance to change cartridges he manages to stop the villain, who is just tired of being treated like a monster because of his strength and jumping skills, which Spider-Man assumes may mean he has powers as well. With the bacteria seized and Kangaroo bound up for the police, Yu delivers the vial and location to the cops pretending to have been sent by Spider-Man. Worried that this could mean he could end up like Kangaroo given how Tokyo has turned on him, he throws the costume into the river.

What they got right: Hey, the villain doesn’t get killed and has the potential to be repentant. Only took three villains. And Kangaroo does indeed come from Australia, so my mistake in a previous review. It took this long for them to say it though. Spider-Man having to change web cartridges is a good way to give him a challenge he can’t overcome with his webbing whether it’s Peter Parker or Yu Komori.

What they got wrong: That’s two out of three stories that end with Yu Komori tossing his Spider-Suit in the river. How many are going to be in there before this series ends? I know Peter has quit being Spider-Man more than once but this is too many times in one shot. Also, for someone who doesn’t want to be the villain he’s shown no remorse over the guys he’s killed in the ring and he stole a deadly bacteria that could kill a good portion of Tokyo. Maybe rethink how you do things while in prison, Kangy.

What I think overall: A good conclusion to this adventure.