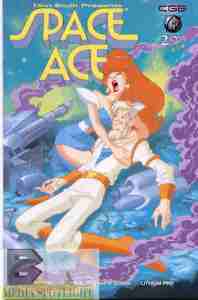 “Will someone make that Dragon’s Lair movie already so we get a turn?”

A slight correction from last issue. Kimmy wasn’t responsible for Ace getting old, just a beard. I got confused because it’s the same beard he gets when his blasted by Borf’s brother Gorf (no relation to that other arcade video game unless it’s an homage) and turns old. He still turns into his younger and older forms. Ace’s ego also gets him and Kimberly crashed on a junk planet where Gorf manages to restore Borf to his adult age. The brothers tie them to a death trap but Gorf only wants Borf to help him on a particular scheme. Could have something to do with the weapon being created on a planet where the Department Of Redundancy Department would feel right at home?

What they got right: Credit where it’s due, Gorf has a point about Dexter and Kimberly raising baby Borf even if their goal is to raise him to not be evil. I kind of picture Gorf being voiced by Michael Dorn while the game and Saturday Supercade segment have given me Kimberly, Ace, and Dexter’s voices. I’m going to have to work on old Ace though. Ace is also pretty flawed but given that he’s being forced into weaker bodies I can understand wanting to reclaim some of his identity. At least he doesn’t look down on Kimberly for being a girl.

What they got wrong: The redundancy speak where they speak redundantly has the potential to be potentially annoying when they speak. Credit for the effort put into it though. The question is whether or not the gag outstays its welcome.

What I think overall: This continues to be a fun adventure. There’s one more issue before they have to change publishers.