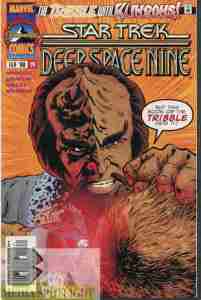 Yeah, we know he’s going to shoot it anyway.

“Nobody Knows The Tribbles I’ve Seen”

Why do Klingons hate tribbles so much? Sure, you could just say that it’s because tribbles don’t seem to like Klingons but after Worf’s reactions to the tribbles that stowed away on the Defiant in the time travel adventure to K7, O’Brien, Bashir, and Dax have their own stories as to why the two groups don’t get along. I know it leaves the summary extremely short but I really don’t want to spoil them for you as each story gets more ridiculous that the next, and even tries to tie in the changes in Klingon design between the original and animated series and later in the movie that became the definitive Klingon look until Secret Hideout created their monstrosity. Worf isn’t talking and we won’t get to hear Morn’s story.

What they got right: This is the DS9 just after the Telepathy War event so it needed something a bit more fun to re-center itself. Of the post-crossover comics this may have done it the best, even though it wasn’t the one that most needed to. (Voyager would be the only one to need it less even though Nog is technically a Deep Space Nine character.) This isn’t trying to be serious or say something or move things along. It’s just trying to be fun, taking a bit of a poke at tribbles and the changes in the Klingon make-up and appliances. It’s all it needs to be really.

What they got wrong: I’ve said it before and I’ll keep saying it when it pops up: the whole ” read it in the original Klingon” gag and its various versions needs to die like a tribble on a Klingon hunting spree. You’ve killed the joke, stop propping up the corpse like it’s Weekend At Bernie’s! Plus the stories only address why Klingons hate tribbles, not the other way around. Klingons wouldn’t care if it weren’t for the way they act around them versus other races.

What I think overall: This was just a fun read and sometimes you need that even in good Star Trek.