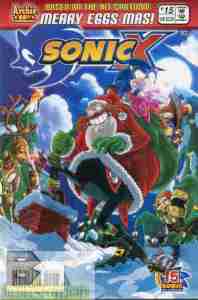 He runs into the Grinch coming the other direction.

It’s the…do we have an official name for Sonic and his friends since there’s no Mobius in this version? Anyway, it’s their first Christmas so of course Eggman is going to do a thematic scheme. Disguising himself as Santa Claus he demands Sonic surrender to him or he won’t leave any Christmas presents. Sonic, who doesn’t believe in Santa, go along with it to expose him which he does with a little help from Chuck and Ella. Eggman is exposed but Sonic lets him go because it’s Christmas.

What they got right: Chuck has a good explanation as to why Sonic didn’t see Santa when he popped up to the North Pole to expose him as a fraud to Chris.

What they got wrong: First off, why are the ADULTS the ones trying to nab Sonic? He threatened the kids he wouldn’t leave presents and there’s no reason to believe outside of Chuck’s explanation that grown-ups believe in Santa in this universe. Eggman’s costume shouldn’t fool anybody, and I’m the guy who defends “Clark Kent”, especially later when to boost the scam Decoe and Becoe are the ones in the suit when “Santa” comes to collect Sonic. And wait…aren’t Eggman, Decoe, and Becoe supposed to be in prison still? What, did Mr. Thorndike have them released as well?

What I think overall: Pardon my themed bluntness but this issue was a lump of coal. It almost feels like an obligatory Christmas issue because it was coming out at that time of the year. (Dating on comics is usually about two months off for outdated reasons.)