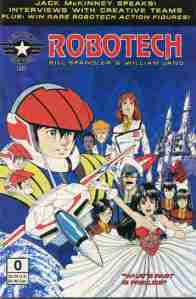 Yeah, you’re giving me nothing to work with here.

“What’s Past Is Prologue”

As a group of Zentraedi plan to return to space a Zentraedi named Rho goes to visit his friend John Carpenter to help construct Zentraedi history, seeing as the Robotech Masters would let them have a history. It’s a short story basically summarizing not only the show but the previous adventures from Eternity Comics as Academy was continuing their timeline.

There’s also an interview with Jack McKinney, or rather James Luceno who was one of the two writers that made up that pen name. Brian Daley, you may recall from the current Chapter By Chapter review of Before The Invid Storm, had passed away. Further interviews include the Waltrip Brothers, Bill Spangler, Wes Abbot, William Jang, and the team of Rosearik Rikki & Tavisha Wolfgarth.

Overall there isn’t a lot here if you already have the Eternity run going into the Academy run outside of the novelty of it after the fact or if you really must have a complete set. It’s just Academy making a refresher for those transitioning with them or a newcomer unaware of the previous license.