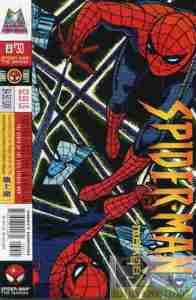 Given that the Clone Saga was going around the same time as this cover I suspect whomever wasn’t reading the series got the wrong impression.

Yu confronts Mitsuo again after the latter messes with the Dai Nippon Iron heads again but Mitsuo uses Yukiko to keep him away again. However, Yukiko finds out what Mitsuo has done and doesn’t fall for his BS, knowing Yu is the real Spider-Man and not responsible for the deaths or the torture of Dai Nippon Iron. She goes to Yu and insists that he has to kill Mitsuo but when he can’t declares that he doesn’t really love her and kind of snaps, bogged down by the prostitution Mitsuo forced her into. (Yes, we learn it was his idea all along, another in his pattern of manipulation.) Yu does confront Mitsuo one last time, and it seems like Mitsuo has the upper hand, but his borrowed spider power runs dry, taking his good looks with him. Mitsuo trips over the side of the building they’re fighting on and plummets to his death.

What they got right: This was actually a good finale to the story, but I’ll get into why it isn’t a great one. There’s more to being a superhero than having powers, since supervillains have them, too. The early stories were bogged down by Yu worried someone with his power could turn evil, especially after the Kangaroo storyline, but here the story is about how powers don’t necessarily corrupt. Yu is a good man and so he uses his spider-powers to help while Mitsuo was always a bad seed even before his parents’ ruining, so he used his powers for evil. In the end his “true face” as it were became his actual face and karma sealed his fate.

What they got wrong: There’s another reason Yu didn’t kill Mitsuo in my opinion and I wish he had brought it up with Yukiko. Yu previously killed the brother of his previous love interest, Rumiko, when he became Electro. This was also an accident but I don’t think Yu wanted to do that to another evil brother of a love interest as it bothered him so much before. (And of course Rumiko was killed in a story Marvel opted not to translate for whatever reason. The nudity could have been censored out, guys. You have artists on staff and someone else doing retouches already. They can draw a bra and panties I assume.) Meanwhile the ending feels like a cop-out. Yeah, maybe the spider-sense, which does not work like the Force and never gave Peter visions like this, was predicting Mitsuo’s death instead of Yu’s, and karma does prove to be a b#$%#, but it feels like Ikegami wanted Mitsuo dead without staining Yu again and chose a rather cheap death. Just have the messed up Spider-Powers do the deed on its own. It already did a number on his face. Also, due to how the issues are split, Yu is finishing a thought from a previous issue, and even on a biweekly basis that would be confusing if you didn’t catch it. To anyone who doesn’t or didn’t read the previous issue they’ll think a page is missing.

What I think overall: With this being the penultimate issue of translation, though the original manga went on after this, the story arc finishing here kind of redeems the faulty previous stories. I wasn’t into how the comic had been dumping on Yu but this and the arc before finally got away from that. I wish they had covered the whole series, and maybe if they had partnered with Viz or something for a proper manga-formatted release (even if they flipped it for the readers they usually court) and didn’t have two fake Spider-Man stories poorly timed around the same time as the reviled Clone Saga maybe we would have gotten those remaining stories.