The Future Of Cartoon Network In 2022?

Yes, there have been cutbacks, but there have been cutbacks all over the new company. The Batgirl movie was apparently so bad that it was canceled before it saw the light of day. Someone tried to tell me that the movie’s test screening wasn’t any worse than Shazam, which actually makes me less interested in seeing either movie or The Violent Emancipation Of Black Adam. Even the supposed merger of Cartoon Network Studios and Warner Brother’s regular animation department isn’t happening, and they’ll be running as separate brands. So what is the future of former home of the greatest cartoon stars, as the promos used to say? Let’s speculate, because that’s all we can do and least I know I’m not an oracle.

Remember how Cartoon Network began? Ted Turner wanted to make a cartoon channel back when niche channels weren’t the enemy of all mankind or whatever mindset turned Arts & Entertainment and American Movie Classics into the A&E and AMC we know today. Even today there are two dedicated animation channels, since Disney reworked Disney XD from its Toon Disney days. (And you can question that given some live-action shows appear on Nicktoons.) Live and on demand streaming services have dedicated channels and sections of their site but it’s all taken from other sources. Pluto TV’s animation channels are not Pluto TV originals for example. 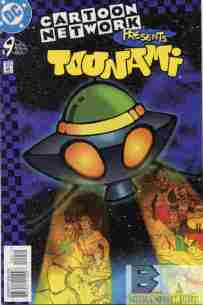 Turner’s solution at the time since there wasn’t the budget to make original shows out the gate was to acquire the Hanna-Barbera animation studio and their library of decades old beloved shows from HB and Ruby-Spears Productions. Joe Hanna and William Barbera stayed on good ties with Joe Ruby and Ken Spears, even working with them to bundle Scooby-Doo with some Ruby-Spears shows, as we’ve seen in the Scooby-Doo intro retrospective this week. So when they closed their doors Ruby and Spears sold their back catalog to Hanna-Barbera. That was two studios and decades of beloved TV shows and some forgotten oldies that got new life thanks to necessity. None of these shows play on TV anymore. Even on Boomerang, a channel dedicated to old shows once Cartoon Network was able to make original shows, only had a few standouts. Scooby-Doo, Tom and Jerry, and the Looney Tunes have a mix of old and new versions flooding the day and what little other stuff remains are more recent fare from Cartoon Network Studios and a few 90s shows like the Ben 10 franchise and Codename: Kids Next Door. I’m not even sure why they’re bothering with the channel give that it’s scheduled worse than Cartoon Network somehow.

I have to wonder if Cartoon Network needs their own studio? Yes, I know it came up with shows people like, the studio being a rework of the old Hanna-Barbera during I think the Cartoon Cartoons period if not the What A Cartoon period. However, all the classic HB characters were folded into Warner Brothers, who produced the Scooby-Doo direct-to-video movies and later series, and still do. Tom and Jerry gets the same treatment from Warner Brothers, who otherwise would have the Looney Tunes and a bunch of animated movies beyond the DC properties. If the two studios are going to be working closer together now would there be that much of a difference, or are folks worried Warner Brothers’ signature style and Cartoon Network Studios’ lack of one would clash?

Personally I’d like to see more classics from the Hanna-Barbera, Ruby-Spears, and Warner Brothers library on Boomerang (if it ever comes down to a lower tier on our cable package so I can see it again) and of course more action shows. Cartoon Network buried the two Transformers shows they had even after the effort of getting them from Discovery Family, who still treats their reruns of the Transformers shows made for their network and The Hub than Cartoon Network did for Robots In Disguise and Cyberverse. Even Justice League Action, a version goofier than any of the Superfriends incarnations, was buried in the early morning with the Transformers and cut down to maybe 10 minutes shorter than they should have been. I’d like to see some good action shows come back. The closest they have are the now adult-targeted Toonami block, and while Toonami started as an afternoon action block of American shows like ThunderCats (the only anime they had in the old days were Americanized Sailor Moon, Robotech, and Voltron before going all anime) it’s all just the anime that kids shouldn’t watch and can still be found without any TV censorship on streaming services.

I’m not saying we don’t need Cartoon Network, but merging Cartoon Network Studios and Warner Brothers Animation wouldn’t hurt Cartoon Network itself in the long run. It could still buy from other studios like Discovery Family does. This would give smaller studios a second chance to be noticed, maybe even get a bigger budget than they would from streaming channels and services, and in the long run could lead to shows CN wouldn’t have considered. Bring back Cartoon Theater and show off all those movies you have access to. Put all the new shows on Cartoon Network, diversify your schedule and content a bit more…okay, a lot more because not everything has to be or replicate Teen Titans Go!, use Boomerang for the nostalgic, which being we changed centuries doesn’t just mean the stuff my generation grew up with, and give the network a new lease on life. If the WB divisions were solvent all of these layoffs, firings, and project axing wouldn’t be needed, so clearly something needs to change for the various divisions to have a future at all. Toonami’s old slogan in the Moltar-hosted years was “building you a better cartoon show”, so why not take this chance to build a better Cartoon Network?