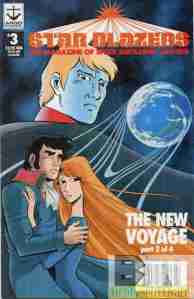 The invading force, the Dark Nebula Empire, was mining Gamilon for a particular ore they need. Apparently nobody told them these planets have inhabitants or that Gamilon was already going to explode. The explosion send Iscandar into a warp with both the Gamilons (who want to help their former enemy) and the Dark Nebula forces (who want the ore from them now and don’t care about anyone else’s rights), but Desslok calls Earth and the Star Force for backup. Despite a terrible first training mission for the Yamato‘s new recruits and the potentially defenseless Earth, Alex’s brother is still there with Starsha, who refuses to leave her home, and they own Iscandar for saving them from the radiation fallout, and soon join in the battle.

What they got right: We get introduced to our new enemy and their goals, though it’s too soon to know why they need the ore. We also see the issues with the new recruits that hopefully will come into play later on, especially Sakamoto’s ego.

What they got wrong: I honestly don’t have any complaints, given it’s part two of a four issue movie adaptation, outside of the continued confusion of using the Japanese name for the ship and the US names for the characters.

What I think overall: I still haven’t seen the movie or many episodes but this does increase my interest in the show while giving me an interesting story. I know this is an adaptation but that’s what a good tie-in should do.