Hey, Kids? No Superheroes For You

Did you pick up a DC Comic last week? I picked up three, as you’ve seen in This Week’s Reviews (including tomorrow’s) and each of them had this contest. 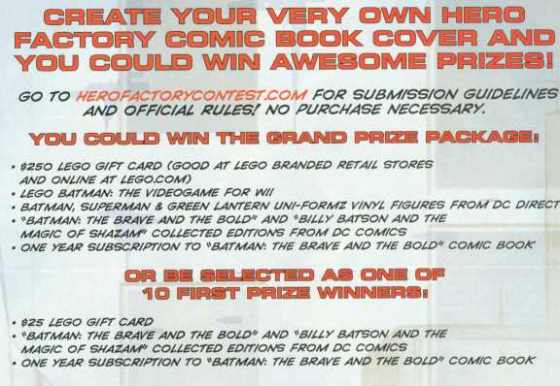 “Hero Factory” is a Lego toyline similar to their “Bionicle” series, only with more of a science fiction based backstory. (I haven’t studied up on it, so I don’t know how, if at all, the two series are related outside of the “building block” design for the figures.) But look at one of the prizes. “One year subscription to Batman: The Brave and the Bold.” It’s a good thing there are other prizes, but that series is ending in October. In fact, so are all but one of the superhero comics in the Johnny DC line. 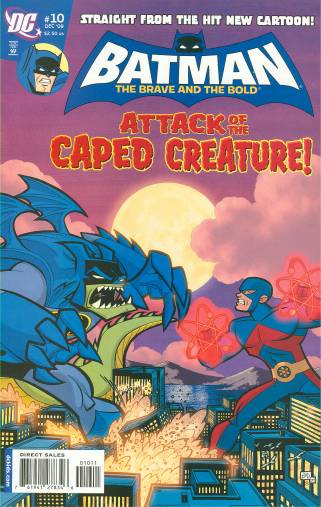 Quite possibly the best story in the series.

It’s true. Solicitations for October show that both Batman: The Brave and the Bold, the comic adaptation of the Cartoon Network series, and Billy Batson & The Magic of Shazam! are going to put out their final issue. Now they could be planning a number reboot like Marvel did with their “Marvel Adventures” comics, but the DC Kids panel at the San Diego Comic-Con pretty much confirmed the cancellation. With the exception of this by Dan Didio, editorial something or other at DC.

DiDio said that some of the canceled series would be seeing light again in one form or another and that he’d like to be publishing at least six to eight kids’ titles per month. Later in the panel, DiDio noted that having “kids books [numbered] in the hundreds doesn’t sound right.” (Art) Baltazar quickly added, “Except for ours,” suggesting he and Franco would like to continue “Tiny Titans” for a long time to come.

I really don’t understand this part. (Well, Art’s line I do.) Superhero comics are completely going away. They will be doing an adaptation of the upcoming CN series, Young Justice, which does feature a reoccurring appearance by Captain Marvel. One would say they don’t want to confuse the kids. Not that it stopped Marvel Adventures, and none of their series seemed to be in continuity with each other despite Spider-Man, Iron Man, and the Hulk having their own comics while also being part of the MA: Avengers comic.

Just when it had gone from great to awesome.

Then again, it didn’t stop DC, either, when had Justice League Unlimited, Teen Titans Go! (and adaptation of the Teen Titans cartoon which oddly was not in DCAU continuity) and The Batman Strikes (based off of the Kids WB/CW show) all going at the same time with different versions of Batman and Robin between the three. Additionally, Captain Marvel has appeared in both the upcoming canceled titles and been different in both.

This month also saw the end of DC Super Friends, based on the Mattel toyline and targeting the youngest of readers with positive messages and some of the crazies ideas of the Johnny DC/DC Kids line. Fans of all ages love this comic, despite being for 5-year-olds. Another quote from the panel:

“All the kids books are loss-leaders for the company,” DiDio said, meaning that they don’t make money, but DC is nevertheless committed to their continued publication and is consistently looking to make the line stronger.

I call fowl on this one. They barely promote their kids line, don’t seem to be making the effort to get them out (usually in favor of their main line, which has comics few if any kids should be reading), and never does anything with them. Sure, the fact that they have a panel and Marvel doesn’t is a point to them, but why not try to put THEM on the spinner rack in grocery stores, or work a deal with Toys R Us, or other places kids can find them? How many 8-year-olds are going to drive to a comic store?

For that matter, why not incentives or urging to insure the comic stores put these comics right where kids can find them, or parents can figure out which version of Batman is right for little Timmy. Why not a campaign to convince older readers to get over themselves and pick up Cosmic Supergirl along with the mainline version? Here were some fan ideas from the panel.

Asked about plans for comics for girls, possibly starring Wonder Woman or Supergirl, DiDio said, “We had a Wonder Woman one that was pitched that we’re going to go back and revisit, and we might go back to ‘Supergirl’s Cosmic Adventures in Sixth Grade.'”

On the possibility of Swamp Thing appearing in a young readers title, DiDio noted, “Swamp Thing had a cartoon for six episodes – I know, because I have all the action figures.” “It came out right after ‘Super Powers,'” Baltazar added. “He had a Swamp Buggy…”

First of all it was EIGHTH GRADE, and it was awesome so you should remember it! Wonder Woman guest-starred in Batman: TB&TB and was a regular in DC Super Friends but otherwise didn’t appear much in the Kids line. As far as Swamp Thing, that cartoon was well animated, but suffered from a low villain count, a lightened mood that was only slightly better than Robocop: Alpha Commando, and a Captain Planet style theme. On the other hand…

…ripping off “Wild Thing”? You have to give them points for that. 🙂 So it looks like there will be only one superhero title, Young Justice. And before you bring up Tiny Titans, there isn’t a whole lot of crimefighting in that comic, is there? On the other hand, Lunch Lady Darkseid. They should win an award just for that.

The sad part is losing Landry and Eric’s big title (although both still find work) and losing Billy Batson, making me wonder if declaring it the “purest superhero comic coming out of DC” wasn’t the kiss of death on my part. These were two of my favorite not-Transformers or Doctor Who reads each month and I will miss them dearly.