“DC Retroactive” pairs writers from a certain point in DC history, who then write a brand new story set in that time period, with their artists when available. I guess a 70’s Batman artist wasn’t available.

A new Terrible Trio is loose on Gotham and although amateurs they manage to escape Batman thanks to escape vehicle. Sadly, this coincides with Lucius and his son having a major falling out, with Lucius later believing that Timothy is part of the situation. But how does Talia fit in?

What they got right: Len Wein was my introduction into the Batman comics (my having only known him from the TV shows) so it’s great to see him back on the character in a story depicted as the comic was in the 70’s. His friendship with Commissioner Gordon here is how I know their interaction. While artist Tom Mandrake and colorist Wes Hartman don’t replicate the art style of the time, it is some great artwork.

What they got wrong: Not trying to match the art style of the period, especially with the reprint story afterwords to compare it to. Also the story takes place after the reprint, which comes at the back of the comic, thus the reference to Gregorian Falstaff would be confusing if  you hadn’t read the reprint story first.Was Falstaff supposed to be part of a bigger story? (Actually, I thought I heard it was a throwaway mention just to make the conversation work, but I could be wrong.) Also there’s the reveal of the bad guys at the end. [SPOILER] Timothy turns out to be one of the Trio.[/spoiler] Why do this? Was this something Len had wanted to do before leaving? Because it kind of bugs me.

Normally (at least how I’ll approach the Retroactives) I’ll be reviewing the next comic as if it was a new comic (it should be a new read for me) and give the recommendation based on the two together. However, this comic holds a special place:

My copy is missing the cover. It's that heavily read.

For the record, my copy was put out by Whitman. Pretty sure it was in a multi-pack, but I know I received two other comics at the time, Justice League of America and Peter Parker, The Spectacular Spider-Man. THE JLA comic also has the Whitman logo in place of the DC logo. I don’t know the history.

Someone is killing the homeless of Gotham, leaving gold coins as his calling card and believing he’s doing them a favor. Batman investigates and finds not only that some of the homeless have formed a small underground group, but a connection to the owner of the coins who believes them stolen.

This is the original. The reprint has restored colors.

The main reason I bought this comic was for this reprint, although I still have my copy. This one of
the three very first comics I ever owned, making it rather special to me personally. This comic set up how I think of Batman, not just fighting costumed freaks with crazy gadget (enjoyable as those stories are), but a simple detective story involving relatively a normal criminal. (Although insanity still plays a part.) It also has one of my favorite Batman moments, where Batman is standing over this one homeless guy, looking all awesome with the best cape in comics…and the dude just falls right back to sleep. 🙂 It’s a light moment in a dark story, and Wein makes even the accents work. The art is also great, and one of my benchmarks about how I view comic art.

Recommendation: I admit a strong nostalgia bias towards the second story, but either one is worth getting. Together they’re worth the extra money for this issue.

Best Scene nominations for this series come from the new story, not the included reprint. 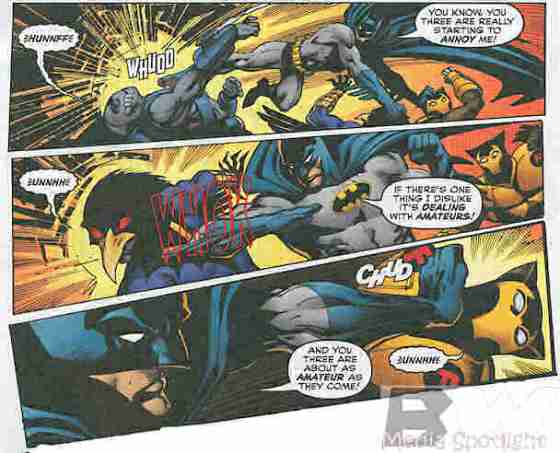