While recovering from my flare-up I happened to notice that my cable company had the full pilot for Nickelodeon’s version of Teenage Mutant Ninja Turtles in their “free on demand” list, so I decided to check it out.

I still don’t understand why Kevin Eastman and Peter Laird sold off their creation to Viacom and Nickelodeon. License? Sure. However, the Turtles are more of a cash cow and one would think they’d want to profit. Sure, Eastman is involved in the rebooted comic universe from IDW Publishing but something must be going on behind the scenes that’s probably none of my business.

The new series seems to be going back to a younger audience based on the art style and tone, which is closer to the original cartoon than the more recent 4Kids offering. So does this and other changes hurt the series or give it a fresh coat of paint?

First we should talk about the intro.

Here’s the same problem I had with Voltron Force (although thankfully the only problem they share). Why do these people think a bad rap intro is what the kids want? None of the previous intros (both of the previous cartoons had numerous intros during their run) needed them. It samples the original cartoon theme and proceeds to suck from there. I don’t think rap has been kid-friendly since Will Smith gave up the Fresh Prince crown. Well, on to the show itself.

SYNOPSIS: Our heroes finally talk their master, Splinter, into going to the surface for the first time. Things don’t go well and Donnie falls for a girl whose scientist dad has been kidnapped by bad guys tied to the Turtles’ origin, namely a race of aliens calling themselves the Krang, brain-like creatures who operate robotic “suits” who have unknown intentions for the scientists they’ve been capturing. While our heroes are able to rescue the girl, this series’ version of April, the Krang escape with the father while our heroes deal with a mutated punk who had been working for the Krang named Snake. And their actions have alerted the Shredder to their existence.

Before we get into the fan nitpicky stuff, let’s take the show on its own merits, and we’ll start by getting the computer animated stuff out of the way, because there are both positives and negatives. I’m not a fan of the Turtles’ character models. While it’s mostly the big feet that bug me, the models are rather plain and the masks don’t look like separate pieces. The humans (and the Krang’s human robots) are easier to get used to and I will give them credit for going a more “cartoony” route rather than trying to be photo realistic and creating an uncanny valley. This also allows the fight choreography to look rather good. I’m certain not expecting anything along the level of the theatrical TMNT from a few years ago, but for a TV budget it isn’t bad.

The characters themselves are well thought out as far as I can tell. (It’s only the first few episodes, after all.) While in keeping with their usual portrayals (what I refer to as “multiversal canon”) these are younger turtles than we’re used to, at least in personality. They’re still supposed to be 15 years old, but they’re almost completely sheltered. They don’t even know what a pizza is (which seems odd because they do have television). Watching how they interact with the above world for the first time should be interesting.

They really did a good job with Splinter. While that beard thing looks silly he’s not the ultra-wise sage of the past, even admitting he should have trained the Turtles better in dealing with enemies. He has his own enemy in the Shredder and he had to know the Foot would come looking for him someday, plus there were the guys who attacked him after he stumbled upon another of their kidnapping, who turned out to be the Krang. It’s nice to see a version of Splinter that isn’t infallible and can still be a mentor to the Turtles without “making a funny” being out of place. 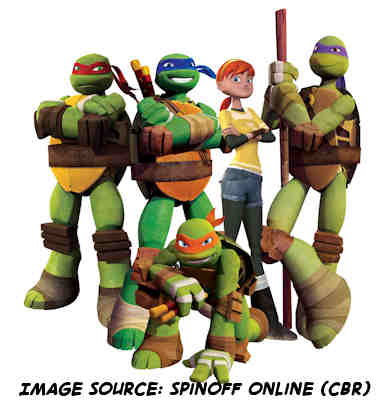 I know Donatello is supposed to be an egghead, but really guys?

I guess we should talk about the changes. Like the IDW comic, the new cartoon seems to be a mix of previous continuities. The Krang are just Utrom using the name of the original show villain (who may or may not be an Utrom by name but we know there’s more than one). This seems unnecessary but it’s the redundancy of their speech patterns, no doubt meant to make them sound alien, that really bothers me. “The ones we are waiting for are being waited for. Krang and Krang are ready for them and will be ready when the ones we are waiting for arrive.” Pretty much like that and very much annoying. They’re still tied to how Hamato Yoshi becomes Splinter, as in the original cartoon, while Yoshi losing his wife to Shredder (the details we still aren’t aware of…or at least I’m not because its the only episode I’ve seen thus far) is kept from the original comic, movies, and later cartoon.

The biggest change is of course April, who is about 15 years old herself now. She seems like a tough little girl, but beyond that she didn’t really get a lot of screen time so I can’t really judge her. These changes aren’t necessarily bad but in April’s case it does change her relationship with the Turtles, and I wish I could say “not in that way, pervs”. However, Donatello has a crush on her, which could easily become quite disturbing. The last thing I want to see is April/Donnie slashfic made official. And I’m sure it’s out there and no I don’t want to see it. At all. Ever.

So is the show itself good? Kind of, yeah. The fighting looks good, the characters have been fleshed out early and they seem to know what’s going on in their TMNT universe. On the other hand, while it isn’t Transformers: Rescue Bots it is skewed toward a younger demographic which I can see some fans having a problem with even outside of the “everything for meeeeeeeeeeeeeee” crowd. I can’t say I’m really drawn to it myself, with the limited time and near full DVR box to deal with. Still, you should at least give it a watch and judge for yourself. You might like it.