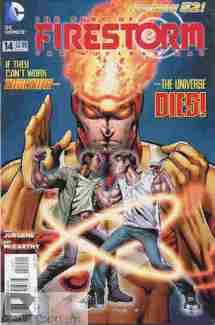 The Fury of Firestorm: The Nuclear Man #14

Firestorm defeats the flunkies, but the head guy in charge of this project for The Continuum wants the Firestorm powers for himself. And during the next attack, he succeeds, which brings Captain Atom into the fray.

What they got right: I’m not sure I can pin down everything that went right here. Great characters, the little moments with the supporting cast, even the appearance of Captain Atom all worked well.

What they got wrong: I haven’t been reading Captain Atom before they canceled the series, but from what I tracked down online isn’t this the Captain’s support group? Now they’re evil? Or where they evil in the other comic? Because of course the DCnU doesn’t have enough evil shadow organizations. Also, I’m used to lying covers, but the current argument they’re having has nothing to do with the story and is kind of just there for a possible later revelation.

Recommendation: A good New 52 book is hard to find, so grab this one before they cancel it or give it to a writer who isn’t as good as Jurgens.

I’d do a “Christmas Story” joke, but I’ve grown to hate the movie on principle.