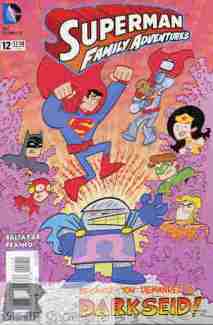 In this continuity Darkseid is a school lunch “lady”. Bet that’s from yesterday’s special.

“Lunch Lady” Darkseid is going to destroy Earth and find New Krypton unless the combined forces of the Superman Family, the Justice League, and the Legion of Super-Pets can stop him. Also, Clark’s two sets of parents get to meet and Clark and Lois finally get together because suck it, New 52.

I really didn’t follow this series because it wasn’t what I personally am looking for in a Superman comic. That said, it demonstrates a lot of what DC’s comics have been missing as of late: fun. This comic, poorly marketed because it isn’t the New 52 I’d wager, had more fun than any Superman comic in a long time. While we still have New Krypton, and granted we don’t know what Baltazar and Franco were planning, they didn’t kill Johnathan off (in fact they brought back Kal-El’s Kryptonian parents and offered him a sibling–which I do have mixed feeling about), and if they did do something like “Grounded” I bet it would be silly and only last one issue. While I wasn’t into every characterization for the cast, I didn’t necessarily have a problem with any of them. (Well, maybe Darkseid as lunch lady, which didn’t work as well here as it did in Tiny Titans, despite being in the same continuity.) The heroes are beloved by the people (which is how DC should work, while DC today prefers Marvel’s “the citizens hate and fear their protectors” schtick) and get along like family, friends, and colleagues.

Superman Family Adventures is a good introduction to the Superman titles for kids and it’s too bad DC is so caught up in the Hollywood-preferred demographic that they don’t get to have their own superheroes anymore. Seek out these comics for your youngest readers and give them a happier introduction to the Man of Steel and his friends. 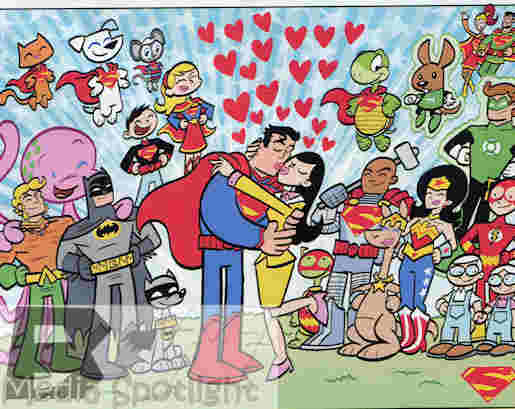