I think this is the best place to get this thought out of the way. The kiss at the end of Man Of Steel? I don’t think it shows that a romance blossomed because as many have said the relationship between Clark and Lois didn’t really progress that way. I look at it more as just one of those moments of passion where you’re looking for something to normalize the world in your head. Like that famous picture of the sailor smooching that girl when peace was declared during World War II. I’ve heard that they were complete strangers and remained so after that picture was snapped.

Now to the second of the Henry Cavill interviews about Superman. At San Diego Comic Con IO9 had a chance to talk to the actor before the Batman/Superman film was announced and asked him about Clark and Lois’s relationship at the end of Man Of Steel. Obviously spoilers are coming for the last few minutes. Also obvious from the title is that I’m going to complain about his perspective and further issues with both the New 52 and the Nolan DC Universe.

The first question we’re shown both in text and a video is how Lois knowing Clark’s identity right off affects the characters.

“I think it’s essential” for Lois to know Clark’s secret, says Cavill. “Because if we’re trying to base it reality, there’s no way that Lois has these direct interactions with Superman, and then doesn’t recognize Clark sitting next to her in the office. If she falls in love with Superman, and she’s ignoring a guy who looks just like Superman, behaves just like him, and has the same kind of mannerisms and behavior, then what does that say about Lois? I like this relationship. She saves him just as much as he saves her.”

Had this comic been made Lois would have learned Clark’s identity years ago. Like early in the franchise.

I’m trying to remember how many times Lois saved Clark. I remember one before she went falling through the sky for the second of Ilostcount times. Now, I do agree that it is to Clark’s benefit that Lois knows his identity. I often advocate superheroes having non-superpowered friends in on his or her secret as a connection to the people they’re sworn to protect as well as their own humanity. It’s the alter egos that take superheroes from the position of gods to the audience and make them human and that all-powerful “relatable” we keep hearing about lately. This is how we relate to Superman, through Clark Kent, while Superman himself is what we aspire to become.

As far as Lois not realizing Clark is Superman, we’ve gone over this before. Clark, despite Mr. Cavill’s claim, doesn’t have the same mannerisms or behavior, at least when properly written and performed. He holds himself differently, acts differently and doesn’t betray any confidence he doesn’t need to be a good investigative journalist. In reviews here and at The Clutter Reports you’ve seen me comment on how an actor portrays Clark and Superman as separate roles even though they’re the same character. Lois pre-Crisis is that uninterested in a man like Clark Kent and that interested in a man like Superman. That’s how it worked. Post-Crisis she fell in love with Clark BEFORE learning he was Superman, if I recall correctly, once she realized that some of the qualities she admired in Superman were present in Clark plus he was more accessible as a person. That’s how the relationship worked.

Next we have Cavill’s view of Lois and Superman’s compatibility.

Then we asked, “So you want them to be more equals, basically.” And he sort of shook his head at that. “More equals? Well… Can you be equal in power to Superman? I don’t know.” We suggested that they could be equal in emotional power, and he seemed about to argue, then settled on, “Yes. 100 percent.”

Somebody please make this same point to the people behind the New 52 please? Superman and Wonder Woman are equals in power but not emotionally. Superman should never be that distant and while Wonder Woman shouldn’t be either nothing about these two connect other than how strong they are. Why should Superman be an outsider because of his origins? That’s where he came from, not who he is. Clark and Lois connect as people, but I’ve already rambled about this as well. Clark Kent is who Superman really is and Clark Kent connects with Lois Lane, not Wonder Woman.

Speaking of Clark there’s a bit about Cavill playing the lighter Clark Kent identity at the end of the film.

It wasn’t necessarily a comic effect that I was going for. I mean, I’m not looking at it from your perspective — how you see it — when I’m playing a character. I’m looking at it from a character’s personal experience, and what he’s going through internally. And at that stage of the story, he’s finally reached the [point] where he can be himself. And someone’s in on his secret, so he’s not alone any more. And there’s a different kind of energy behind that. There’s no longer this sense of, ‘I’m alone. What do I do? And now there are aliens invading, who are my people, who want to destroy my planet, and the people I’ve come to love.’ It’s now moved on from that. And so I don’t see that as a chance to play comedy, I see it more as Superman evolving and coming into his own. 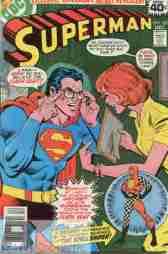 That “I’m alone” part shouldn’t be in there in the first place, but he’s putting a lot into A FEW MOMENTS OF A FIVE MINUTE SEGMENT IN THE MOVIE! So here’s HOW I see it. At what point are we shown that the Clark Kent that walks into the Daily Planet (which looks surprisingly unscathed along with the rest of Metropolis–the construction companies must have their own superpowers) is Kal-El “being himself”? The whole movie, from flashback to present events, is about Superman finding out who he is. Thanks to Jonathan’s back and forth about “I know you’ll be great and save but now you can’t be great even if people die, even me” Clark didn’t grow up WITH his powers but AGAINST them. He was too busy dealing with WHAT he was to figure out WHO he was. That was a failing.

You can’t use how we know who and what the characters are based on past continuity when you’re going out of your way to ignore the source material to create a brand new one that gets as far from the source material as possible. Smallville, at least the early seasons, established that Clark used his powers to help people in secret before becoming Superman (or The Blur but that’s another rant) as well has having dreams about being a reporter for the Daily Planet and wondering about where he came from and for what purpose he had these growing powers. The pilot episode of Superman: The Animated Series showed us the early years of Clark Kent as he became aware of who he was as much as what he was and how the two connect. Ruby Spears’ Superman cartoon also defined their Clark’s early years with the “Superman Family Album” segments. The movie failed to do all of that because all it showed of Clark was the outsider who is afraid of his own powers and what people will do when they find out he has them. Beyond that Clark had no personality outside of wanting to help. Everything came from his superpowers and Clark had no individuality in the movie beyond that, which isn’t how he was depicted in the previous examples.

So I’m glad Mr. Cavhill really likes the Clark Kent he was given, but it’s not the Clark Kent we know and love and it certainly isn’t the Superman we’ve rooted for these past 75 years Maybe that’s the point as people have pointed out, but that’s also the problem.