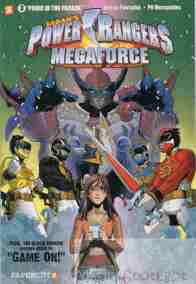 In the first story, Vrak tricks Emma into staying out of the battle while he sets loose a monster for the Rangers. The fight’s OK, and my only problem with the monster made of trash is that it’s only streamers until it starts drawing from the Earth’s core, making the trash aspect barely there. It was better done in one of the Hamilton Press comics of the original series. The message seems to be about knowing when to trust others and when not to, but I’m not completely sure it worked although I did get it. The art is well done and Emma was well used.

The second story finds Vrak tricking Mr. Burley into controlling a monster to attack the Rangers. I’m glad it didn’t go into “video games are bad, kids” territory and it was a good idea. I am bothered that this is the only one produced thus far that has more than one story only because the later Hamilton comics and all of Marvel’s run were half-comic short stories, while Turbo only got a full-comic story when they crossed over with Beetleborgs. I don’t want a pattern set where these are all short stories. It bugs me when most kids comics do that because they often have potential for full-length tales and it isn’t fair to the younger readers. This, however, wouldn’t have worked as a full story so it’s fine. I just don’t want this to become the rule in this series.

Overall it was well-done and recommended to fans of the show.