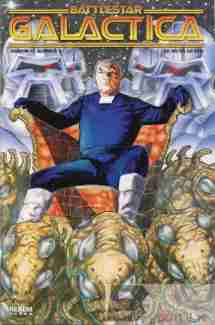 “Finally, a chair that fits me!”

As the shadow creatures attack the encampment, the Colonists realize that destroying the rock formations may be the key to their defeat. However, Sire Obob gets paranoid and fires with the shuttle’s weapons, injuring more people, including Starbuck. Back on the Galactica, Jolly introduces Adama to their new visitor, one of the original Cylons! But another visitor and Baltar’s new friends spell trouble for the fleet.

What they got right: Boomer socking Obob after he went nuts. About time someone did that. There were a lot of good ideas and I’m sorry Realm never had the chance to finish them.

What they got wrong: Something I’m beginning to notice lately is that ending series seem to try and fit in all the stuff the writer wanted to do but couldn’t. It happened with Buck Rogers and Fury Of Firestorm, for example. Maybe the symbiote thing wasn’t necessary at this time.

Recommendation: “Season 2” showed a lot of promise but “Season 3” was more about ideas than the end result. It’s still worth looking into for fans but if this run was any indication I can see why Realm Press isn’t around today.

We have two more once shots, the “Eve Of Destruction” prelude and the “Centurion Prime” one-shot to look at this weekend, including a special Sunday review posting.