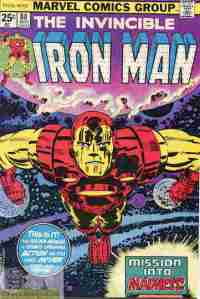 “I think my GPS is busted.”

After an attempt to explain the supervillain war that made me look for someone going “comics, everybody”, Iron Man chases Firebrand and the Black Lama to Lama’s universe. It’s a world where the US works a lot different but this synopsis doesn’t have room to go into it. An enemy of the Black Lama tries to take over from his daughter but Firebrand and Iron Man end up working together to stop them. Then the villain and hero have a disagreement that sends Firebrand to consider joining the other side and he bails. Meanwhile, the Lama has come to his senses while a part of Stark’s mind starts going insane, a side effect of traveling to the other universe.

What they got right: The art is fairly decent. The part of Tony’s mind going mad is portrayed by a caption box marked “Mad Stark” and written with spaces and it puts across Tony is going slowly mad in the new world.

What they got wrong: I’m not sure if having access to the earlier issues would make any of this make sense. I’ve known about the Black Lama and his challenge thanks to reviews in the past and I’m not sure this storyline ever makes sense.

Recommendation: I’m not sure this would work for anyone who isn’t trying to have a complete run like I am (or as close as you can). This is just weird and hard to follow and I don’t think the previous issues would change that.