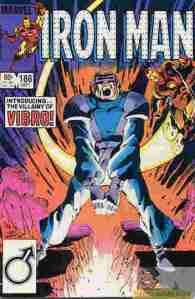 “I think my pants just ripped.”

Tony, Cly, and Erwin lay the groundwork for their new lab. Meanwhile, Professor Vibereaux made the mistake of offering his machine that can absorb seismic energies to Franklin Fortney, an unrepentant jerk who has him check a very dangerous fault line, just as an earthquake hits. Instead of killing him (because this is comics), Vibereaux absorbs the energy, now able to channel those energies into a powerful blast. His memory’s scrambled, “Vibro” only remembers his hatred for Fourtney, and with Rhodey’s pride keeping him from letting Tony work on the damaged repulsors, he only beats the villain by pure luck. However, the cops that arrest him aren’t that bright and we get a tease that next issue Vibro will be back!

What they got right: A fresh start for the now sober Tony. Vibro’s costume may be lame and his origin only works for an 80s comic, but his powers combined with his unhinged mind make him a good foe for Iron Man.

What they got wrong: Fortney, however, that special kind of jerk that only exists in fiction. At one point he’s part of a group of hostages at an oil rig (it’s never explained how that happened), and he doesn’t seem to give a fig about any of it, snarking away despite plenty of people with guns and being annoyed by the other hostages. He also doesn’t care when Viberaux appears to have been killed. Are we really supposed to root for Vibro this hard? Also, every TV seems to be right on the Exposition News Network. It’s so blatant in the way the newscasters talk that they’re trying to make as sure as possible the reader is fully aware of what’s going on. I expect Dark Helmet to pop up and go “everybody got that?” at any moment.

Recommendation: I don’t have the conclusion to this story, but this issue was a good setup. Worth looking into at least.