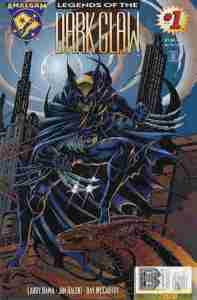 This is sadly the best fusion of the Amalgams.

Legend Of The Dark Claw

Dark Claw has his hands full with Hyena playing more games with our dark hero. His day gets worse when Carol Danvers, alias Huntress, finds out Logan’s true identity, and Swallow (Dark Claw’s sidekick) doesn’t like her very much. However, it will take all three of them to stop Hyena from killing the President.

What they got right: We’ll get to the individual amalgamations in a moment, but somehow this fusion of Batman and Wolverine works so well it’s scary, especially when you know how much I hate Wolverine. The characters work together really well.

What they got wrong: What did Swallow have against Huntress? She outright hates the woman to the point that it has to be more than Carol magically stumbling into every aspect of Logan/Dark Claw’s life.

Would I buy the series: Despite my intense dislike of Wolverine and the 90s take on Batman something about this amalgamation works quite well. I might consider it.

Recommendation: This was a great example of the Amalgam Comics game done right. It didn’t try to amalgamate everything it could fit and just focused on what would make a good story rather than taking all the nods possible. This is one I would highly recommend.