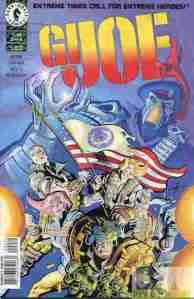 I didn’t want to let our GI Joe Extreme comics coverage end without looking at the TV show, and the best way I can do that is by looking at the intro. In this case, the intro shows it all…and it’s all bad. The cartoon came from Sunbow, which is even more disappointing when you consider what a great job they did on the original A Real American Hero series. There was an obvious budget issue compared to A Real American Hero, and I wish that was the worst problem. Again, go watch TJ Omega’s review.

Like I said, many of the failures of this show are seen in the intro. It’s very sad.

Unlike TJ I kind of liked the live-action segments because of how cheap they were. It was unintentional comedy. That doesn’t show up in the video I used as of this writing but they’re easy enough to find. Then we get into the biggest problem with this intro right off the bat: everything flashing at you with no time to comprehend what’s going on. They could be slipping in subliminal messages for all we know. Why would someone do something like….

I apologize for having made that gif so very long ago.

Then you have the exposition, showing that the intros can be as bad as Conan The Adventurer while doing something completely different. There are numerous voices, one of them being Clancy and the rest sounding like news reports, giving the story of the show, that some major superpower fell and the world is in chaos. This is followed by the bad dentist advertisement that is our heroes, and you just know Black Dragon (the guy in the ninja outfit) is gritting his teeth under that mask, too.

More flashing images follow leading to the dumbest line they could muster:

“The odds are a million to one.”

This is one of those things badasses in fiction say to sound macho badass when it’s just really stupid. The intent is to say “we live for a good challenge”, but it comes off “we don’t care about the mission to protect human lives as much as facing the greatest odds possible so we can show off how badass we are”. No real soldier would say that and seriously mean it, but this doesn’t come off as joking. Stone really looks and sounds like it wouldn’t be worth doing if the odds favored the heroes saving the day. And that’s just stupid.

This intro was everything that was wrong about 90s comics in cartoon form. It sells the series alright…it sells you on watching something less headache-inducing! And with that we bid farewell to the Extreme Joes. They really aren’t missed but if you’re curious about this version, try the Dark Horse comics. They’re a lot better than the show.