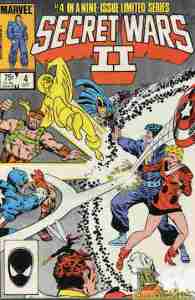 The Beyonder looks to experience love. Things don’t go well with one girl because she only loves what he does for her, not following the example of Molecule Man and his wife. Seeking someone who is more capable of the love he seeks, the Beyonder ends up romancing the Dazzler, but she’s not so easy to woo. Getting a trinket from Shaman’s magic pouch (in exchange for freeing his daughter, Talisman) doesn’t work either. Even faking an Avengers attack isn’t quite enough; although she comes to care about him she doesn’t love him. Beyonder gives her a taste of being all, but she refuses to lose herself and dies while escaping the power. Beyonder brings her back to life and, realizing he’s now controlling her love, frees her from his control and promising to leave her life. (Although the teaser for Dazzler #40 at the end claims they aren’t done yet.)

What they got right: The art was decent.

What they got wrong: I’m still not getting into this story. Shooter seems to be trying to explore concepts we take for granted, which is a fair idea, but love is a bit hard to define and this seems to be Beyonder’s biggest failure yet to grasp. Shooter also ends Alpha Flight’s conflict with rescuing Talisman. I don’t follow their adventures, but this is the second time Beyonder’s been used to appear to fix a problem “deus ex machina” style. (The teaser also teases some ramifications in Alpha Flight #28.)

Recommendation: I’m still not impressed with this series. #3 is the only one I’m considering keeping at this point. If you ask me, skip this series.