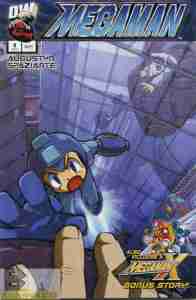 No joke, this is a nice use of a reflective surface.

Mega Man teams with Protoman to track down the enemy, which leads them to Doctor Wily. However, Doctor Light has already found him, and kindly asks him to stop disrupting his various traffic systems, and has a device to disrupt Wily’s killer robots. Then the building turns into what I can best describe to finds as a prototype for the Yellow Demon (minus the yellow sand goo stuff). Mega Man gets Light to safety while Protoman defeats the building robot and disappears. And so our hero rejoins his family, prepared for whatever may come next in both of his identities.

The Mega Man X back-up story “Killing Time” has X and Zero overwhelmed by enemies until Zero gives X a time travel device from Doctor Cain (unnamed but fans know who they mean), which he uses to go back in time seeking Doctor Light’s help. It appears to be setting up a Mega Man X comic that is just a crossover with the original series. It never happened because Dreamwave’s Capcom comics line was cut short when Dreamwave was.

What they got right: It was nice to see Mega Man and Protoman work together for the first time. What I’ve played of the games didn’t have them team up and from what I’ve heard it didn’t happen until Capcom’s recent retro games where Protoman became a playable character. In the cartoon that had come out near the same time Protoman sided with Wily, possibly because Mega Man 5 (the first Mega Man game I ever owned, by the way) had him as the villain (although he wasn’t, but I won’t spoil that here). This is closer to how it should have been in the games. Wily’s robot designs are pretty cool too and there are hints of other Robot Masters. This ends up feeling like the precursor to the games then and while Archie did it better way later it could have been a decent start had Pat Lee not screwed up the company and screwed over his comic creators.

What they got wrong: Wily causes untold damage, risks tons of lives in Mega City (formerly Monstropolis according to the first issue), and blows up his house and lab and Doctor Light’s response to politely ask him to stop attacking him because he has a box that can shut the robots down? That’s WAY too casual, even for Doctor Light. Also, it’s probably the biggest screw-up of the adaptation. Rock became Mega Man to stop Doctor Wily’s first invasion, and then had to keep using the armor for future attacks. Here, “Rocky” was already Mega Man for some reason and yet Doctor Light sent him to junior high where he gets attracted to a human girl and fights bullies well before Doctor Wily was a problem.

Recommendation: As I’ve said with the other issues, this is a terrible adaptation but there are some good ideas here that I would like to see reused for an original character. It’s still a good superhero comic for kids or anyone not turned away by “all-ages” monikers and at least a curiosity to Mega Man fans as the first US attempt to bring the Blue Bomber to comics. It’s worth a look.