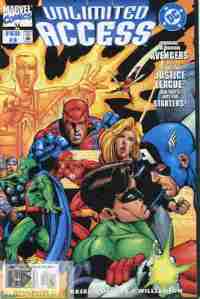 The Avengers and Justice League (the males under the influence of Amazing Grace and the two women getting into their own argument) begin fighting. Hoping to break them up, Access calls in Superman, who just happens to be the then current “electric” style. He manages to break them up just in time to fight Darkseid’s parademons. Meanwhile, Darkseid has made a deal with Magneto and his Brotherhood Of Evil Mutants (at the time Toad, Mastermind, Scarlet Witch, and Quicksilver, later joined by the Juggernaut) to help mutants take over the Earth in return for their help capturing Access. The hero seeks help from the Teen Titans but ends up with Young Justice, while the original X-Men also join in. After chasing off the Brotherhood, a misunderstanding causes the Young Justice and X-Men to argue and in attempting to get them to work together merges Robin and Angel into a new amalgamation.

What they got right: Yay, new amalgamations! While I don’t like seeing heroes fight I do like seeing them join forces.

What they got wrong: I was thinking about something at breakfast concerning the whole “bum is a future version of Access” thing. They missed an opportunity to create a new mythos around the idea of Accesses and the brothers just by claiming Axel is the only Access. Otherwise, the X-Men/Young Justice argument (Access stopped it from becoming a fight) was kind of forced or shows they’re a bunch of hot-headed teenagers just when they were starting to get along.

Recommendation: While I don’t like what Kesel did to the Access concept the story is still interesting. The conclusion comes this afternoon in the new schedule and it’s worth checking this final Access miniseries out.