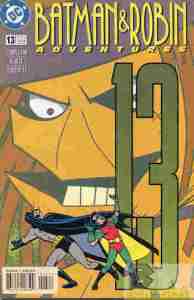 The Batman And Robin Adventures #13

Scarecrow’s latest fear gas concoction induces full-on visions but his real plan Batman has to figure out…after being doused with the stuff. Between working on an antidote and trying to figure out what Scarecrow is up to plus dealing with the visions, Batman soon finds the connection to the reunion concert of the Beat Brothers (a Beatles stand-in) and must get past a network executive who doesn’t want to listen to him before the country turns into a mass riot. (Insert political commentary joke here and move on.)

What they got right: This was a good mystery within the confines of the allowed space of the book, and it wasn’t afraid to push the limits of what you can get away with in a kids comic, like a dude being buried alive in one dream and Robin having his neck snapped (off-panel) in another. This was a show geared to older kids, maybe around teenage to just barely before, not the same target age group as say Batman: The Brave And The Bold or even the Filmation cartoons, so it works here. Scarecrow wanting to unite people in fear is in keeping with how warped his mind was becoming in the series.

What they got wrong: Part of me wonders if Batman having visions was necessary. Maybe with more time it would have worked, had the show not already dealt with Batman fighting the Scarecrow’s toxins at least twice. It’s not like the jerk executive would have passed up the ratings unless Batman could point out the machine. He dragged Scarecrow right in front of the guy and he STILL wasn’t listening.

Recommendation: A good Scarecrow story for the limited space the comic was given considering the time period. Worth checking out.