I told you Monday’s story to tell you this one, and since we have an extra day and I can’t think of a topic, we’ll go ahead and tell it. The first appearance of Point Dread and the Talon Fighter was unremarkable considering the importance placed on them, especially Point Dread. It supposedly appeared once every 20 years and he used it to create a baby clone of the Goddess and I’m just going to ignore the rest of that squicky little plan. Although I just realized that means Teela is 20 years old in these stories. Mattel seemed to be intent on making the accessories and minor playset important to each other. The original toy included a record and storybook. (Records were the CDs of our time and despite the old joke I’m sure you’ve heard of CDs.) Their first appearance in the comic were together, as we saw. I am still finding it odd that the Talon Fighter appears to be Skeletor’s mighty flying vehicle but we didn’t see it in action and it could be part of the Point Dread legend.

If you only know of the Talon Fighter from the original cartoon you probably don’t know Point Dread. Filmation never used it as far as I recall. In the minicomics, however, it’s a big deal. As you recall from Monday’s review, the Goddess popped the two objects on top of Castle Greyskull…instead of waiting for them to disappear which means Skeletor couldn’t use them for at least 20 years but I’m sure she thought it would be fine. It turned out to be a bad idea, however.

Skeletor brings “drive by shooting” to the skies of Eternia.

Masters Of The Universe Series 2 #7

You have to hand it to Skeletor, he doesn’t give up easy. Using a mystic crystal called the Crystal Of The Caverns, Skeletor focuses his psychic power to pull the Talon Fighter off of the perch on Point Dread. Castle Greyskull itself has decided it likes its new decoration and even opens the jawbridge so giant hands can come out of it (explain that to your dentist) but the power of the Crystal is too much for the Castle. So now I wonder why Skeletor didn’t just take the opportunity to open the jawbridge wider so he could go in and claim the Castle? He’s been inside it before WITHOUT Teela, or maybe the illustrated booklets represent another continuity. That’s three in just the minicomics alone. Throw in DC, Filmation, Star Comics, the Golden Books…there’s quite a multiverse going on in just the original years and I haven’t even gone overseas.

Once Skeletor has the Talon Fighter he uses it to rip Point Dread from where the Goddess placed it, on top of the left tower. Oddly, the Castle doesn’t try to stop him after that. There’s a huge opening for taking it that Skeletor misses out on. He also makes the mistake of leaving the window open on the Talon Fighter. This is a bad idea from a flying perspective but the Crystal flies out and smashes on the ground below. Assured he doesn’t need it anymore anyway since he has Point Dread and the Talon Fighter already he brushes it off. As you can imagine he will regret that.

Skeletor meets with Beast Man and Tri-Klops to prepare his raid on the Royal Palace. Later at the Palace we learn that everyone except for He-Man, Man-At-Arms, and Zoar are left. (See in the toys and comics Zoar was his own character, a giant armored falcon who fought alongside He-Man on a few occasions.) This interests me because in Monday’s comic everybody was there (except for Zoar) and here we have only three heroes and we’re missing one villain. I don’t know, I just find it interesting for some reason.

He-Man wishes he could get some excitement, which he gets just as he says it (never challenge fate, He-Man) as Skeletor drops Point Dread, from which Beast Man starts blasting away. Now I’ve never owned the toy. Like I stated the only Talon Fighter I had was a snap-together model kit that could be played with using the action figures but didn’t really stand up to use. So I don’t know if Point Dread has its own lasers or if Beast Man was just blasting away, since he does use it to blast a hole in the wall for Tri-Klops to lead his attack force of cannon fodder in to attack. I also wonder if Point Dread can move under its own power. Otherwise Beast Man is just continuously firing through that same hole in the wall and being rather easy to avoid. Nobody attacks the structure directly so I don’t know if it can take a hit or is just a fancy gun emplacement. We know it can do this, though. 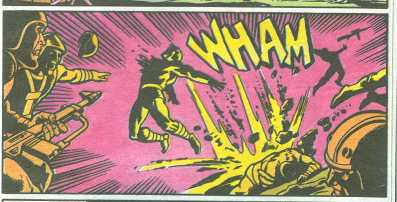 Remember this from an old Friday Night Fight? That guy being pointed at appears to have taken shrapnel through the chest. Cohn really didn’t pull any punches, just hid the darker stuff from kids. And it worked so I have to give him credit for that. Skeletor’s forces get an early start and with Skeletor blasting at them from the skies things look bad for our heroes. However, the good guys had flying toys of their own. He-Man grabs the Wind Raider and is joined by Zoar to attack the Talon Fighter (the falcon-shaped plane and I’m not sure if that’s irony–darn you, Alanis Morissette!) while Man-At-Arms tries to rally the not-dead guards against Tri-Klops’s foot soldiers. Air AND Ground attacks? No, I’m not going to get political here. It would date a review of a timeless tale and might be in poor taste under the circumstances.

Man-At-Arms starts to turn the tide until Beast Man starts firing from Point Dread’s guns again (so I guess they aren’t Beast Man’s) while Skeletor gets a shot on Zoar. We learn later he only had his tail feathers singed, which still makes flying difficult for a giant bird I guess. And here’s where He-Man proves he’s as good at strategy as his Filmation counterpart. The Talon Fighter is may be stronger and can shoot lasers out of its satellite dish but the Wind Raider is more maneuverable. So he tricks Skeletor into following him into a dive, avoiding the Talon Fighter’s laser dish. Skeletor is so intent on killing He-Man that even Beast Man can see what’s going on before Skeletor. Not that it helps. The Talon Fighter flies beak-first into Point Dread and both disappear in an explosion.

Surprisingly, Skeletor and Beast Man survive that, and wake up outside of Castle Greyskull without a scratch. Yeah, I don’t get it either. As for Point Dread and the Talon Fighter, they’re fine too…and sitting back atop Castle Greyskull. Without the Crystal Of The Caverns they’re going to stay there, too.

I used to read the daylights out of this comic as a kid, even more than the other two I had (the previously reviewed “He-Man Meets Ram Man” and the soon to be reviewed “The Ordeal Of Man-E-Faces”). I found one at a comic convention so I have a copy in good condition now. But why did I like it? There were no character moments outside of Skeletor being overconfident. There was a smaller cast. I think it was that as a kid it was a mostly-action piece. Every moment has some kind of action, with some moments (Skeletor planning with Beast Man and Tri-Klops or He-Man wanting some excitement) to catch a breath. This is 15 pages long, smaller than a regular comic, with three to four panels a page. There isn’t time for deep character moments, just action. And yet it stops long enough to not be bogged down with action. Granted you’re rooting for the heroes because you bought the toys and maybe read other minicomics beforehand but I already had by the time I got the original copy I owned so I can cheer our trio and the unnamed guards on. Once again Cohn makes good use of the limited space of the minicomics and sells the toys better than Star has done with a full-sized comic and without drawing Earth into it like DC did and Filmation improved on.

This is one of my favorite minicomics and that’s the reason. It’s definitely one to check out if you can.