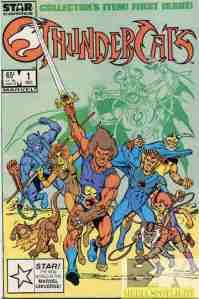 “Hurry, guys, Silverhawks is coming on!”

The planet Thundera explodes in space, its former residents, the Thunderians, race to escape the dying planet in search of their new home. However, their enemies, the Mutants, attack, destroying the ships and targeting the lead ship, carrying the nobles of Thundera, the Thundercats. They seek the power of the Eye Of Thundera, nestled in the Sword Of Omens. However, aided by the sword, the boy king Lion-O manages to chase them off. However, the ship is damaged and while the others–Panthro, Cheetara, Tygra, the twins Wilykit and Wilykat, and Lion-O’s nursemaid Snarf–go into suspended hibernation the wise elder Jaga pilots the ship to the nearest planet, Third Earth, as old age claims him. Now as a spirit, Jaga instruction the now grown Lion-O in using the Sword Of Omens to awaken the Thundercats and chase off the mutants one more time. During their escape they are brought down by the power of a living mummy calling himself Mumm-Ra. Our heroes are in for even more trouble in the future.

What they got right: As adaptations go this worked very well. You get the important events, and with the space allowed it all fits.

What they got wrong: That last scene, however, came from the start of the next episode, which also had Lion-O and Snarf making friends with another group of space refugees, the Ro-Bear Berbils. They show up next issue but if you’re going to adapt the origin story, get both episodes. Instead they stuffed a truncated scene of Mumm-Ra and the Mutants teaming up just to have it here.

Recommendation: This is not a substitute for the episode, although this came out just as home video releases were a thing. In fact “Exodus” was one of the first VHS tapes we rented when we got our first VCR. Still, if you want the complete set I do recommend getting this and it’s a fair introduction to the original series.