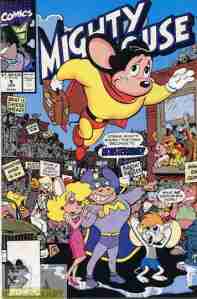 So then he goes to some other city and protects that. Mouseville’s lost is Rodent City’s gain, right?

Moustermind, one of the “subplots” Samor once tormented Mighty Mouse with before they became friends, has returned and again uses his mind control powers to take over Mouseville and chase off Mighty Mouse, only this time Mighty Mouse has a solution when Samor tells him that Moustermind’s powers have their limits. His solution? Start a Mighty Mouse convention that draws so many fans that Moustermind blows out his powers trying to control them all. As punishment, Mighty Mouse has him run the complaints booth. It’s better than the last two issues but it didn’t really impress me as a story. Art was good, though.

And finally Bat-Bat’s origin concludes, and only one issue before the series was canceled. Bat-Bat and Tick finally track down the Smoker and reveal that he’s actually…a caddy mentioned in passing in the first chapter. Well, credit for holding on to that concept I guess. Also, more overdone fourth wall jokes. At least it’s over.The next issue has Mighty Mouse going on the anthropomorphic version of David Letterman to save the comic, but it’s going to take more than that. The series started pretty well but lost steam after the “Mices On Infinite Earths” storyline that should have taken the full issue that had part two. After that story I can’t really recommend this series. And sadly I’m all out of Mighty Mouse comics for the time being. We’ll move to something new in this spot next week. It could be a one-timer or the start of a new series. We’ll find out together next week.