After a week off for family things, Spacebooger has sounded the fight bell once more. The post I was going to do I realized partway through writing it might not actually have a kick in it, so I finished it and set it as a draft for the future. Instead I bring you another fight I had as back-up. And of course it’s Ninjak again.

Obsession is destructive. It can blind you to your own actions, no matter how noble the cause may be. Agent Blue will make you do extra work if you don’t call him Lieutenant because even though he is now part of the anti-super group Inquest he still thinks of himself as a cop and you will call him by his police rank or else. In the same vein his brother was somehow killed during a battle X-O Manowar was involved in, and Blue blames him for it, and has taken his rage out on all superheroes. So when he’s hired to bring in Ninjak his obsession is still a problem. I mean, the man faked a hostage situation to draw him out, and he still sees Ninjak as the villain. That’s kind of dumb.

Ninjak of course comes in to break up a hostage situation but finds Inquest waiting to take him in…over a copywrite violation case. Because why would go after the villains CAUSING the destruction instead of the guy trying to stop it? That’s crazy talk. 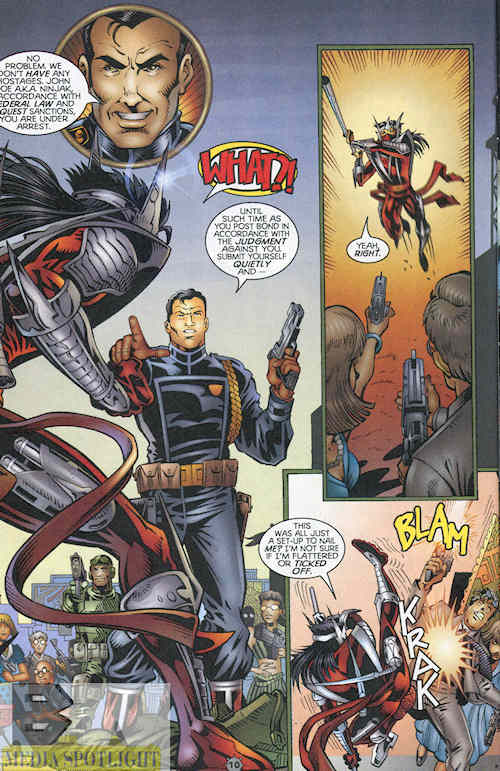 I’m betting the taxpayers and mall patrons and business owners would go with “ticked off”.

So of course Ninjak is going to try to escape from this.

Ninjak isn’t going to get a job at Sears anytime soon.

Then they try to net him. Emphasis on try.

Guess he was out of net puns. We probably should be relieved.

Then it’s time to face Agent Blue himself. 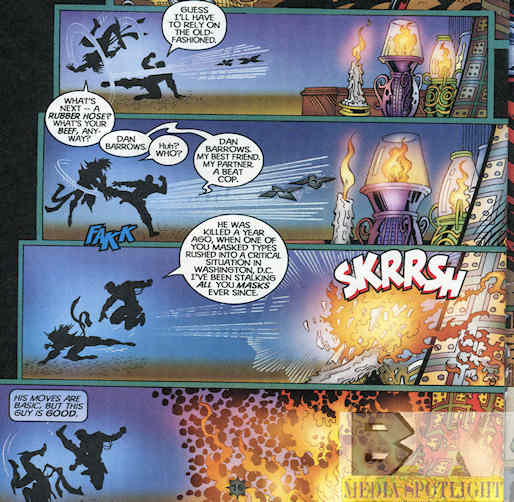 You burn it you bought it, Ninjak!

And one more kick for the road. 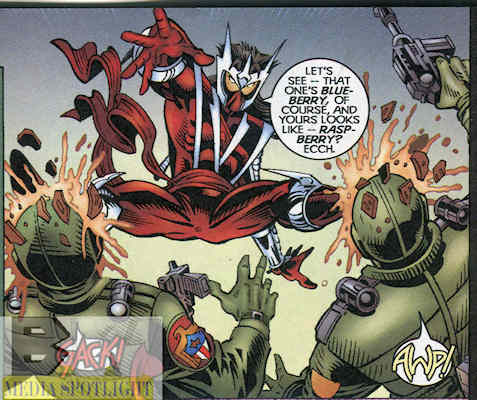 There’s always a way to freshen up a classic gag.

I was going to save this for the Prize Fight seeing how many kicks there were but you don’t have to be a ninja to be desperate.

Head over to Spacebooger.com and vote for your favorite Friday Night Fight! Winners of these 12 rounds head to the Prize Fight so feel free to join in. We could use the competition. Rules are posted at Spacebooger’s on Tuesdays.