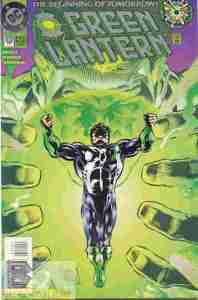 I see Hal got himself a new beach ball.

Kyle and Hal disappeared during Zero Hour, but Hal uses the last of his power to journey to Oa, Kyle being dragged along accidentally. Hal can’t beat Kyle without any power so he plays on Kyle’s insecurities, learning about Alex’s death and uses that against him as well. He convinces Kyle to give him the power ring so he can charge up, but when Kyle realizes Hal is going to try the Zero Hour thing again he tries to stop him (you may remember that fight), eventually regaining the ring, but Hal restoring part of his Parallax power. In order to ensure Parallax can’t attempt to recreate the universe again Kyle destroys Oa, barely escaping the blast, and heads for home.

What they got right: Kyle versus Hal was kind of necessary, as the new Green Lantern had to have a fight with Parallax eventually. and this is as far as I recall the one #0 that actually serves as an aftermath to Zero Hour instead of just noting some change caused by the event or just retelling an origin story.

What they got wrong: Green Lantern Corp fans were probably already upset that Hal turned evil and killed the rest of the corp as well as most of the Guardians. Destroying Oa probably just made them madder, as if a final strike of the concept they enjoyed. Not to mention the Guardian corpses, Killowag’s supposed skeleton, and the Snow White crypts of dead Green Lanterns. That’s salt in the wounds right there.

Other Notes: Issue #53 was my first introduction to this new Green Lantern and it was the interaction between Kyle and Alex that led me to accept the new GL. Then I bought this issue, intending it to be my first of collecting the series, #53 having come in a collector’s set. It seemed a good time…until I learned here that Alex had been killed. (I would later learn how she died and I was really upset by it, especially after getting #52 as a back issue and being reminded how cool she was.) This actually made me decide NOT to pick up the series or go to the back issues because I didn’t want to see that happen. While I’ve picked up a random issue here and there I still haven’t picked up the full series because it was that character dynamic that first interested me and then it was gone. Then you have all of the shenanigans to keep Hal in the spotlight as much as possible and now he’s back and they blamed Parallax on a space bug or something…it’s just a huge disappointment.

Recommendation: Otherwise, probably the best of the Zero Hour Aftermath stories since it actually builds off of Zero Hour: A Crisis In Time. It’s worth checking out if you want to see where that goes.