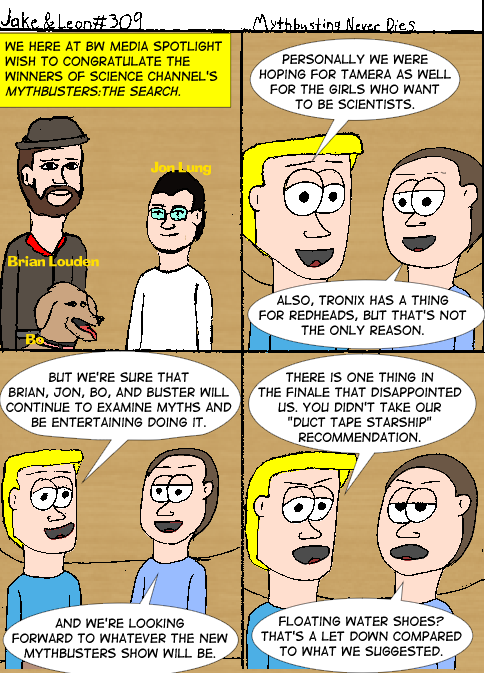 Maybe the finale of their first season as Mythbusters?

Remember when I suggested that two strips ago? I finally got to see the finale this week and I’m satisfied with the results. Had they kept Tamera, Martin, and Allen on as well it would have been really cool. They could mix and match teams depending on the myth, and all five worked really well together. But for whatever reason they only wanted two and I think Brian and Jon will do just fine. They join the ranks of Adam, Jamie, Tori, Kari, Grant, Jessie, and Scottie. (Anyone remember those last two? Scottie–which I could be spelling wrong, was on the build team before they became official, and when she left Grant took her spot. Jessie substituted for a few episodes when Kari was on maternity leave.)

Over at The Clutter Reports I wanted to introduce you to my Mini-Cons, since they’ll be popping up again in Transformer toy reviews. I’m doing Transformers-related reviews all this month since I need to focus on some life events at least for the next couple of weeks, so I might as well keep the theme going.

The Saturday comic review returns to my comiXology library. That’s all I really have to report. No series changes or anything that I can think of. I am going to get at least one ConnectiCon 2016 panel done this month. I’m also going to restructure the Patreon in case anyone wants to check it out. Hope to do that this week or next. Hmmm. That’s it for updates. Yeah. Um…so….how’s everything with you?