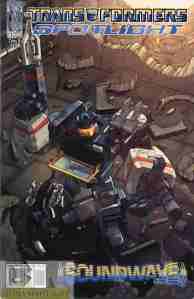 “I can’t leave you two alone for a second!”

The year is 1984. Soundwave was ordered by Megatron to keep an eye on Bludgeon as he went over Shockwave’s old projects. This brought them both to Earth, where Bludgeon wanted to take some of the Energon Shockwave seeded Earth with as part of his plan to resurrect Thunderwing (as seen in Stormbringer). Soundwave attempts to stop Bludgeon and his followers along with Ravage and Laserbeak but they use one of Shockwave’s weapons to put him into stasis lock in cassette deck mode, while a year later Skywatch found the defeated Recordicons (their current fan term). In present day the still locked Soundwave sits in an electronics store where he is about to be purchased.

What they got right: It’s an interesting addendum to Stormbringer as we see more of Bludgeon’s attempt to restore Thunderwing. Soundwave is more like his old tech spec, plotting what is in his own best interest instead of Megatron or Shockwave’s loyal lieutenant. There are also some interesting nods to previous continuity. For example Bludgeon holes up in Mount St. Hillary, where the Ark crashed landed in the Marvel run. (I don’t think the mountain was ever named on the cartoon.) And his facsimiles are collected in a ship that resembles Laserbeak’s Cybertronian form in the old cartoon.

What they got right: But I have a feeling that the easter egg would have worked better had it been Soundwave’s craft and not Bludgeon’s. Also, this takes Soundwave out of the story, possibly permanently if not for later stories bringing him back, which I hope is explained. Also to be explained: how long has Skywatch been around hunting Transformers? Have there been other appearances between Shockwave’s seeding (long before humanity existed) and 1984, or did Bludgeon’s appearance alone lead to the formation of Skywatch?

Recommendation: While not necessarily important to the main story I think this batch of Spotlights were simply interesting tales of Transformers who hadn’t been in the comics, possibly testing grounds for the other two million stories Furman wanted to tell. It’s worth checking out if you see it.