I’m thinking this may be the last of it. Oh the series is continuing. I’m just losing interest thus far. It’s like they took the show I grew up with and re-edited it, which given the history of Robotech is more annoying than you’d think. Thus far we’ve seen political intrigue added in, an important character killed early, a slightly altered relationship, and no reason for me to enjoy it. I thought the story was fine as it was, and so did every other comic publisher that came before it. Academy even continued the continuity Malibu was setting up and it was still the same continuity as the TV show Comic adapted. Other publishers after them did their own thing apart from the other comics but the show was still canon.

And it’s not that I can’t accept the comics altering the show. The Devil’s Due run on Voltron remember is my favorite interpretation. It’s just I’m not seeing a huge enough difference to really get into it. And my friend Sean, who has been supplying these comics because he wanted my thoughts, says there’s another big twist in here, which means if you want to avoid spoilers this isn’t the review for you. So let’s get on with it. We have two comics to go over. Maybe something will finally click with me. Not the faces, they’ll still be stuck in “dull surprise” but maybe something will.

Another action figure not in scale with the rest of the line.

This is an adaptation of “Sweet Sixteen”, the eighth episode, which means all that speeding up has now put the comic an issue ahead of the story. But there are some big changes, some of which I don’t really care for. However, admittedly a couple do. It starts with Khyron screaming for revenge, and then transitions to Breetai telling him no. Not only did he disobey orders but then still got his butt kicked and the SDF nearly destroyed. After Khyron starting ranting about how he was conquering galaxies before Breetai could spell his name or some junk he decides to go after the ship anyway. He’s kind of a dope that way.

And here’s the first unnecessary change. As I mentioned in the Voltron crossover review, Robotech isn’t a hard sci-fi show. It’s just a war story that happens to be set in space and using robots and transforming jet fighters. Now we have a rift in space/time caused by the fold generator’s disappearance and now it’s growing. I shouldn’t be surprised that the guy involved with adding gods to the Transformers is responsible for throwing time travel into Robotech and I fear where they’re going with this.

Meanwhile there’s Minmei’s party. Rather than having her birthday in the restaurant it’s going to be a huge street party since they’re using holograms to create and day & night cycle to make things easier for the residents. I’m not bothered by this as she does make a point that will all they’ve gone through the people could use a little revelry to break the tension. However, Minmei gets rejected for the Miss Macross Pageant replace Macross Has Talent, an obvious take on America’s Got Talent (or since this is a UK comic it’s probably more like the original, Britain’s Got Talent). This is supposed to be a big change, but later she actually performs at the party, somehow the video goes viral (probably easier when you have only one city of people watching SDFTube), and she ends up getting picked up anyway. Meaning this change was….pointless!

We get a slight tease that something else is going on as Lisa and Roy start discussing the ship crash and what she knows thanks to a message left by the late Captain Gloval, but you don’t get to learn anything because Rick is called in. As per the episode he is given the rank of full lieutenant and given command of his own squadron, Vermillion Squadron, and assigned Max Sterling (ace hotshot pilot) and Ben Dixon (ace loudmouth). Unlike the episode however, this is rushed through pretty fast. This oddly added subplot is taking time away from the good parts of the episode. Lisa is actually not upset that Rick was promoted saving her butt. Their relationship is already removed from the TV show and not positively. I like the way the show approached the characters better. Personal preference perhaps but even the scene is more interesting to watch when it’s the official ceremony with other pilots followed by Roy alone giving him the squadron while Lisa gets embarrassed.

The scene where Khyron attacks the ship is almost the same. We don’t get to see Rick and Minmei’s discussion when they have to run off because she’s on-stage. Someone contacts Khyron from the ship but he was already on his way to execute his plan. I don’t think that mattered any. He also calls the ship to give them a chance to surrender, allowing them to hear the words “micronians” (what the Zentraedi call humans) and Zentraedi. The ship also gets a garbled call from Earth saying ship’s security was compromised. It’s for Global because obviously they don’t know what happened. Also, when Breetai has Khyron chained up and his head shaved to actually punish him (okay, point to the new version…Breetai in the show should have done something to punish him besides the recall beam) he starts going on about being important to the ship or something.

And here’s the biggest disappointing change. It’s minor but it speaks a lot to Rick’s character and how he feels about Minmei. In the episode it ends with him outside her window apologizing and giving her his medal of honor. It’s a cute and romantic moment as Rick shows how much he cares for her and wanted to give her something for her birthday. Instead the comic ends with him grabbing her and planting what appears to be an unwelcome or at least surprising kiss despite no concrete proof they’re even a couple right now! That’s assault, Rick! I’m curious to see what her reaction is, so let’s get to the next issue. 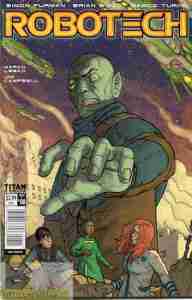 No, Breetai, this isn’t the action figure cover.

SELECTED COVER ART: Simon Roy (because they were out of the action figure covers)

And her reaction is to kick him in the sides, tell him she just wants to be friends and say that if he can’t accept that they shouldn’t see each other anymore. Nice going, guys! While the Rick and Minmei romance lost steam in the later episodes in the early episodes it was rather sweet and you were rooting for Rick. Instead we get sexual assault and friend zone, so you just killed it entirely and it doesn’t look like he’ll end up with Lisa like he did in the regular continuity so that was a waste. That’s a fail!

Meanwhile Lisa is sending teams to finally start surveying the ship, possibly trying to find the security leak mentioned. Claudia goes to Roy’s room and goes to work on the recording to clear up the image of who was responsible for Gloval’s murder. I’m just going to spoil it now because if you weren’t ready for spoilers I did warn you. It’s Roy in the video. Why? HOW? I’d have to double-check but I’m pretty sure he was rather busy at the time and he was the one who knew about the cameras in the vending machine. So how the heck could it be him? My money’s on the guest the sweep finds, namely TR Edwards, the villain of Robotech II: The Sentinels and a constant pain in Return To Macross, a series set during the days before the SDF-1 was ready. He claims to be the man with the answers but I wouldn’t trust him.

The main event of this issue, however, throws a number of episodes together into one book because apparently they aren’t far enough ahead in the series. Breetai decides to send in Rico, Bron, and Konda in undercover, which didn’t happen sometime later and these three volunteered after catching the Miss Macross competition, setting up their character arcs. Rick and his team, not just Rick in an armored Battleoid, are out here and end up inside the Zentraedi ship to get their butts kicked by Breetai in one-on-three combat, Rick getting the worse of it. Oh, and somehow Rick can see the infiltration ship when nobody else could even though last issue he had another blurry spell during that combat. This leaves the spy ships that are taking over for the damaged radar tower from last issue’s battle vulnerable to attack and destroyed. I know Furman has a terrible problem with story arcs and having too much happen at once, but is Brian Wood also a sufferer?

Sean, I know you’re reading this. I just can’t ask you to spend money on this, at least for my copy. I know you’ve been enjoying it and probably others in my audience has as well, but I’m just not enjoying this. The story was fine the way it was. Now we have politics, altered relationships, plots that go nowhere, and now the potential of time or dimension travel. I’d be happier completing my Comic collection of adaptations or the Malibu/Eclipse/Academy comics I didn’t pick up. (Except for Aftermath and Clone because I could never get into those titles.) I ran out of borders and bags and these comics do not encourage me to want to get more.

It’s not that the stories are necessarily bad. Furman’s subplot addiction aside it’s not too bad. The art is still dull if you need a critical complaint, but personally I was perfectly happy with the original and I just don’t have a need to fill up my comic collection with this series or make other people spend money on something I wouldn’t buy for myself. If some of you out there really enjoy it, that’s fine. It’s just not the series I came for. I haven’t decided if it’s worse than MASK because while IDW messed up the concept Titan is going after the actual stories, and it’s the same reason I didn’t bother with the movie-reimagined Star Trek comics. They might be good, but I liked what they did before.