For the record I’m doing this review under protest.

I’ve reviewed plenty of crossovers in the past, from great ones like Battle Of The Planets/Thundercats to horrible crap like Thundercats/Battle Of The Planets. I do enjoy a good crossover, and some of the ideas work within their given realms because the concept of the multiverse either exists or at least isn’t too far-fetched based on the universe the story takes place in.

Robotech and Voltron: Defender Of The Universe are not those franchises. At least it wasn’t until that one clip of Legendary Defender I saw and you can make the case for the “realms” of Third Dimension but Robotech doesn’t qualify. It wasn’t hard sci-fi. It was a war story melodrama set in outer space. The idea of alternate realities doesn’t fit into the that mythos (not counting the Clone series from Academy Comics, and I don’t think any of us want to do that–yeah, I’m sure somebody liked it and I liked the concept at least but it was hardly Robotech). And yet this is the only way to can connect two series whose only connection is “cobbled together from multiple Japanese animated series”.

I’m not even against the crossover. I just don’t care about it. It’s not the kind of story I care to see. Sure, I may want to see both groups of 80s animated Ghostbusters to join forces, my Transformers and GoBots were best buds as were my small number of Masters Of The Universe and Thundercats figures, but for some reason having the Voltron Force fighting the Zentraedi I don’t care about. Fighting the Imperial Empire maybe, but Panosh Place’s Voltron action figures were roughly the same size as my Star Wars figures.

So why do this review? You can blame Sean, the guy from the comments…and why aren’t more of you commenting on stuff? I want to know other people’s thoughts on the stuff I write and I know people are reading. Feel free to comment. Feel free to disagree. Just don’t be jerks about it, because I had to freeze an article once because of that. Anyway he really wants me to review this crossover and brought me his graphic novel trade so we’re going to take a look at this. What I can say, he’s one of my best friends, and it’s not like he’s asking me to review crap. I hope. 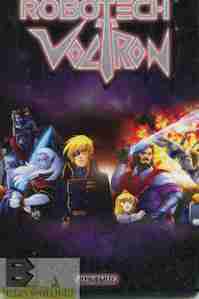 (collecting the five issues of the miniseries)

I notice no editor listed.

We start with some opening narration that’s written like someone remembering the opening from Voltron without double-checking. Minor nitpick, but if you want a major one, how about this part rushes through, as if Yune really wanted to get to his story and the heck with exposition. The other space explorers are pushing Keith to finally tell Allura how he feels about her but it’s interrupted by a comet speeding towards Arus. Apparently Voltron once found a way to stop it or something but that information was lost when Voltron was blown to five pieces. I would also think the planet being bombed would be part of that but we don’t have time to explain things. The Voltron Force quickly form Voltron…and they all promptly disappear with the comet. Why? I’ll assume that’s explained later. I hope something is.

Years later KING Lotor arrives on a newly-conquered Arus and finds the remains of the Castle Of Lions. All he finds is a tapestry showing the other pilots with halos kneeling before Allura. Lotor wonders what happened to her. So do I. Explaining things isn’t in anybody’s best interest at this point. Just rush to set-up the story.

Then we cut to a “last time on Robotech” style narration. We seem to be near the beginning of the story where the SDF-1 takes off as the Zentraedi comes in, but Admiral Hayes already knows about the Zentraedi…I can’t be certain when this is. Then something breaks through space/time, which Lord Breetai thinks might be the Invid arriving early but Exedor assures him it isn’t. Something bursts through and destroys their ship, so I guess they’re out of this continuity. As the SDF-1 prepares to space fold as the object heads toward it we cut to Macross Island as Max Sterling and Ben Dixon, who are supposed to be Rick’s friends later in “The Macross Saga” are on Macross Island and apparently already pals. Well, we weren’t told they weren’t by the time they join the RDF and become Rick’s first subordinates. It still feels odd to me.

They also happen to see the object come down and go to investigate, Ben a bit reluctant to do so. They find the Black Lion, heavily damaged, just as an RDF helicopter arrives. (There is admittedly a nice nod to Max’s relationship with Myria, the “green-haired alien” Ben mentions and in regular continuity Max marries and gives birth to Dana, hero of the second Robotech war.) They’re taken into custody by T. R. Edwards, a name that should mean something to fans of post-cartoon Robotech lore since he’s the jerk that takes over the mission to the Robotech Master homeworld to rule it with an iron fist during Robotech II The Sentinels books and comics (and intended for the series if it had been made–he’s basically the other villain here) so I see this not going well. This ends the first issue as the GN keeps all the “to be continued”, dividing the issues with cover art and profiles on the various Voltron or Robotech mecha as depicted in the story. I do like the glowing vector lines used for the profile pages. I’m neutral on the regular comic art though.

Chapter 2 opens on Arus, setting the events of this story during the events of Arus’s fall. Zarkon actually sends young Lotor and his Arusian consort Lora, Lotor’s mother (I don’t know if she was even named in GoLion, but I haven’t checked), to Arus during peace talks. Coran sends his wife and infant son (whom I don’t remember ever being mentioned but that’s fine) to safety in case the Drules do attack while he remains with little Allura, who reads stories of pre-divided Voltron to the baby. So now I’m confused. Does this take place in some merged dimension or in an altered Robotech universe? And an altered Voltron universe, since Alfor is now a master sorcerer for some reason, even forming a Blazing Sword when, surprising nobody, Yurak and Hagar betray everyone, surprising Lora and Lotor. Hagar gets three of the Lion Keys while Alfor tosses two of them to Coran before going into battle. Jump to the future, where King Lotor is just looking at the tapestry, then calls for Hagar.

Then we’re in Iraq during Operation: Desert Storm. I’m more confused. What is with all this time-jumping? Does any of what has been in this chapter thus far have a purpose? “Pops” Hunter and his co-pilot, Dan Fokker, are shot down, and only Pops escapes. After the war he takes in Roy and now in 2014 Pops has passed on even though he was talked about as if he was still alive…somebody find me a map because I am so lost here!  Time that should be explaining important parts are instead going to flashbacks that aren’t needed to fans of the two properties or just bypassed. Change events at the time history was altered. Even J.J. Abrams got this right with the Star Trek movies. Folks, despite the opening I didn’t come in prepared to hate the story. I was prepared for it to be good but not interesting me. It’s interesting me…but for the wrong reasons. Yune seems to be trying to put his expansion on lore that doesn’t really matter to the fans and didn’t matter to the original stories either. And that’s for two separate series. 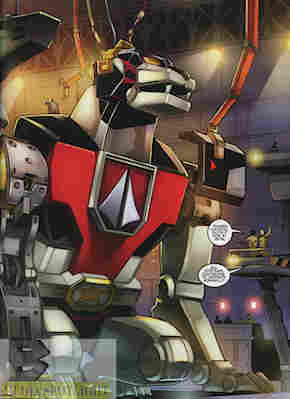 Edwards does come off as the kind of guy who put his name on his sisters stuff. Even the dresses.

For example, drop the history we’ve seen in this chapter thus far and start with Roy being the one with the eyepatch and Edwards having two eyes. That shows this is a different timeline. We also learn that the SDF-1 was indeed destroyed…except it wasn’t. A couple scientists think something happened with the Super Dimensional Fortress committed a hyperspace fold, and that the comet didn’t crash into Macross Island, just something left behind. That something is of course Black Lion, which they’ve been rebuilding while studying the “crystalline power structure”, referencing that stock footage of power going through the Lions or Voltron and treating that like the power source. I’m okay with that, and the idea of finding a power source other than Protoculture has potential for this story. They also replaced the Voltron logo with the “UN Spacy” logo of Macross/the first Robotech war. If I can deal with Optimus Prime wearing a Cobra symbol I’m not losing sleep over something that admittedly looks kind of cool. Meanwhile, the comet behind this mess is returning, and Khyron uses it to sneak his way into Earthspace, ending the issue.

Issue #3 begins with Keith waking up from a coma after a nightmare where he sees Allura in a RoBeast coffin. He’s debriefed by Admiral Hayes, Colonel Edwards, and Captain Fokker, who lost an eye when the ship disappeared. His eyepatch kind of looks like Captain Harlock’s, but in the original continuity it was Edwards who was scarred. It’s during the debriefing that Keith, and the readers, learn this may be a parallel universe (for example, the Robotech Defense Force instead of Galaxy Alliance) and that the other Voltron Force members are just fine…except for the missing Princess Allura. The meeting is interrupted by Khyron’s attack.

Keith is put with the others, who get him up to speed about the SDF-1, and that they made friends with Max, who is now a Veritech fighter pilot. They also learn that they’re both in the past and in an alternate dimension, because why not double down? There is also a version of the Omega Comet, something from the TV series and possibly the comet in question that brought them here and now heading in the direction of where Arus is or would be in this universe.

Back wherever Arus is, Zarkon tells the people they’re now under Drule rule (rhyming!) and when Lora protests killing hostages until the royal family surrenders, Zarkon kills her right in front of Lotor. This was never suggested in the US show but is taken from GoLion and is part of the obsession Lotor’s counterpart has with Allura’s. Speaking of Lotor’s obsession with Allura, Hagar tells him that the comet can transcend space/time, which he sees as a way to bring Allura back while Hagar warns that could bring Voltron back as well. Observing all this is Sven so at least he’s still around.

It’s at this point that I realize the review is going a bit long. I’ve done reviews of miniseries before under Scanning My Collection (speaking of crossovers, the GI Joe Versus The Transformers multiple miniseries had one article per miniseries) but I guess there’s more to look at here, even if half of it is asking for explanations. Come back tomorrow for the conclusion, but so far my biggest gripe is the rushed pace in some areas and unnecessary info (even if the events of Arus’ past play a part everything that took place prior to the events of the show are useless, like Rick and Roy’s dads dying…and for that matter, where IS Rick? He’s the main character of Macross but he only gets mentioned when he’s a baby. Maybe he’ll show up tomorrow as we resume issue #3 before moving to the last two.