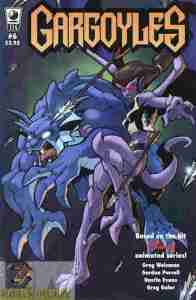 Bet the Spartans weren’t ready for this.

A tale from when Goliath, Elisa, Angela, and Bronx were being sent around the world by Avalon. One place they end up is a monastery laundry tub. After escaping a triggerhappy monk (even using bows and arrows instead of guns that still sounds weird) they end up in a cave where they run into Coldstone, being trained by the monks to control his darker side. (This is when the reanimated body still contained all three gargoyles whose stone remains were used to create him.) The others offer to bring him to Avalon to rejoin the remnants of their clan but the evil persona takes over and knocks them out…except it was a trick, Coldstone worried that someday his evil brother may take back control. He and the monks send them back on their journey, where they ended up in Shambahla. In the present Xanatos has a meeting with that evil side, now in his Coldsteel android body.

What they got right: An actual stand-alone story, re-introducing Coldstone, and I’m guessing Weisman had plans for the “Cold trio” to make a reappearance. It’s actually a pretty good “lost tale” story.

What they got wrong: But I have to question the framing device, where Shari is telling the story to a bored Thailog. Is Shari some mystic or an Illuminati agent? I know she’s supposed to be a collector and teller of stories (my kind of woman if she wasn’t so creepy) and I guess she knows part of the story from however Xanatos learned about it (I’m sure he’d tell the Illuminati) but I’m still skeptical. Also, some of the word balloons aren’t placed correctly and it ruins the reading flow.

Recommendation: A good stand-alone story that is probably setting up where Weisman was going next. Worth checking out. I may actually hold on to this issue.