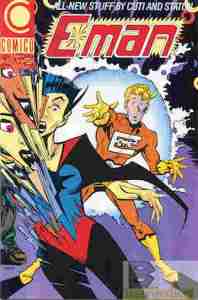 Just yesterday Vamfire got a fortune cookie warning she’d go all to pieces. She didn’t think it was literal.

Set after E-Man Special #1, scientists find the star where E-Man and his sister Vamfire came from. Wonder if it too is sentient like they are (E-Man and Vamfire are sentient energy) he decides to head up into space to the star to find out…and promptly gets lost. Before he left he convinced Vamfire and his wife (if my research is accurate), Nova Kane–who has similar powers to the siblings–to go to the fair and learn to get along. They start to until Nova insists they check out the hall of mirrors and after an argument Vamfire fall in there, the mirrors taking parts of form and turning them into living creatures, some messed up by the sillier mirrors. The weakened Vamfire seeks out their detective friend Mike Mauser and the koala Teddy Q to find her missing portions. They find one calling herself Valentine and convince her to help track down the other “sisters”, while one named Velma takes a job with Mister Boar, son of E-Man’s imprisoned arch-enemy who is tired of his wife going on about how she now owns the company. Since Velma’s form resembles his wife she assumes he’s going to kill his wife and have her assume her identity but he really just wants to kill the lookalike out of satisfaction. The other sisters arrive and make him pay for it just as Mauser and Valentina, who is really Nova (wanting to help), arrive and collect them all, saving Vamfire’s life.

What they got right: This is my only exposure to the character (it came in a kit for auditioning for Comic I purchased in the 1990s as a sample of their house style if memory serves) and while it lacks E-Man we do get a hint of his personality. The focus is on the various parts of Vamfire and the quest to find them. It’s not a laugh-out-loud comedy or serious drama, just a fun little misadventure with Mike, the fake Vamfire sister, and Velma. The surprise with Nova being Valentine works partially because I was wondering why she disappeared after unintentionally causing the mess, but it was nice to see that Vamfire didn’t hold it against Nova even if they don’t really get along most of the time.

What they got wrong: I’m not sure why Nova thought she’d have to pretend to be one of the Vamfire parts when she can use her powers to track the others just fine and should have been helping. Teddy was asked to stay behind with the dying Vamfire (who was in the hospital but they couldn’t really do anything for her) and yet tags along on the expedition to find the other parts and nobody says anything beyond Vamfire weakly reaching out to him as he left. Whenever a real place in New York is mentioned they feel the need to give an address. I also guess they thought the special was enough to re-introduce E-Man to comic readers since he’s barely part of his own first issue, volume four or not.

Other notes: Comico was the third company to publish E-Man comics. It began under the original Charlton Comics and I guess Staton and Culi managed to maintain the rights when Charlton sold so many of their other characters to National/DC Comics. After Charlton closed they moved on to First Publications and later Comico. Their last run was with Digital Webbing and I wonder if might work out something with the new Charlton and bring it home? Since the original sold so many of their characters to DC the new one has had to create all new characters and titles.

Recommendation: A fun little story. I may not be rushing out to get the full series even if I had a job right now but I would read other issues if I came across them. Worth taking a look at anyway.