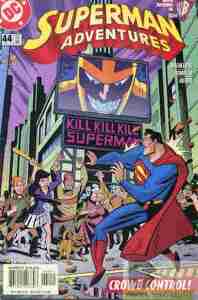 “Here’s one reoccurrence I didn’t miss from the Silver Age.”

The Commander is back and Superman still isn’t affected by his hypnotic suit. So he uses his powers to hypnotize the people of Metropolis into killing Superman (or trying to) whenever they see him. Not only does this make it difficult to save others but people could get hurt in the process. While this is going on Hamilton’s been trying to stabilize a new isotope and missed the Commander’s message, so Superman works with him on a plan where the Commander himself is endangered by the “kill Superman” obsession and he’s force to undo the command, making it safe for Superman to do his job. Meanwhile, Lex acquires the Commander’s outfit, which he’s hoping to reverse engineer into some plan against Superman.

What they got right: As I mentioned in the caption gag this is an idea that showed up a few times during the Silver Age, at least on covers, and it works well here. It’s a story about what Superman can do when he ends up causing more problems than he’s solving thanks to this outside interference, in this case an uncontrollable urge in the people he’s saving to try to kill him. It also shows that he’s smart enough to come up with a solution. Villains who challenge Superman mentally are what work best given how overpowered he is than most of his enemies.

What they got wrong: Was everybody in Metropolis except for Maggie and Professor Hamilton watch the same live news show at the same time, even all those kids? I could see a bunch of people, but everybody?

Recommendation: A rather good Superman story. The Commander is an interesting foe. Worth checking out.