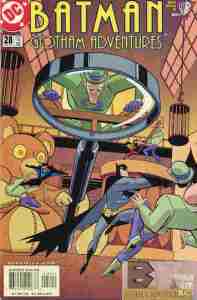 The Riddler kidnaps a popular singer and leads Batman and Robin into traps with his riddles. Survive the trap, get a CD with the next clue. The music however turns out to be the real clue as Nightwing is a fan and notices the singer has been leaving hints to his whereabouts in the music. Using those clues instead the trio find Riddler in one of Joker’s hideaways and he may have forgotten to ask the Joker for permission to use the base and his underlings. The underlings surrender rather than deal with the Joker’s wrath and the Riddler is defeated.

What they got right: Nightwing is the one who solves the singer’s clues and Batman acknowledges he was important to the case. I like seeing Batman being friends with his friends, especially members of the Batman Family. Tim, who in the main continuity is a better detective than Batman (which even Bruce acknowledges under a writer who doesn’t worship at the Bat-Altar) but not necessarily in the DCAU, still manages to figure out clues as well. Everyone has a part in solving the case like a good team should.

What they got wrong: I wanted to see a scene where the kid Batman had to swipe one of the CDs from (in a race to climb a statue so the boy earned it) gets some kind of compensation, like actually meeting the singer in person, but I guess they ran out of room in the comic.

Recommendation: A good example of Batman and friends in the DCAU and what made them good. Check this one out.