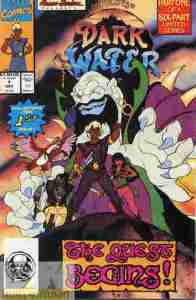 The Pirates Of Dark Water #1

Based on the TV series and adapting the first episode, “The Quest”, our story takes place on the seafaring world of Mer. The seas are corrupted by the mysterious “dark water” as well as the pirate lord Bloth and his crew. And old man escapes from that crew and is rescued from the sea by a young lighthouse keeper named Ren, who learns before the man is reclaimed by the sea that the man is his father Primus and that Ren is the prince of the doomed city of Octopon. He also learns that the dark water can be dispelled by the 13 Treasures Of Rule but before he can even begin his quest he is captured by Niddler, a monkey-bird working for Bloth, who takes Ren to his master. When Bloth betrays Niddler however, he helps Ren escape and is tricked into helping Ren reach Alomar, a monster who is the key to beginning his quest. However, Bloth wants the treasures, and the magic compass Ren now wears that will lead him to them.

What they got right: The set-up is quite good. It’s a great concept for a series and the lore appears to be thought out. While there are some minor nitpicks I could make about the dialog, there is the need to compress for comic space and it matches what I remember of the episode well enough.

What they got wrong: Although the ending was cut short because of that limited space. While the art team does try to get the characters right, the models are a bit too detailed compared to the show. Ryka, Ren’s caretaker, looks a bit too primate-like while Niddler is a lot scarier than he appeared in the cartoon. On the story side, how did Primus show Ren the vision of a restored Octopon and how coincidental is it that Ren happened to be the only one to try to save him? At least Ryka doesn’t just write it off as a hallucination so there’s that I guess.

Other notes: The Pirates Of Dark Water aired on ABC’s Saturday morning line-up but was first aired as a five-part miniseries simply titled Dark Water and aired on Fox. When the show was renamed for ABC they also redubbed Roddy McDowell’s performance as Niddler with Frank Welker, who opted for a more screeching voice that he would use throughout the series even though later appearances of monkey-birds in the show were more “normal” sounding. I would love to find that original dialogless intro and McDowell’s superior performance (no offense, Mr. Welker). The show unfortunately ended with only eight of the 13 treasures found.

Recommendation: The show was quite good and worth a watch. The comic also isn’t bad and after adapting the miniseries pilot they had an original story arc which I didn’t pick up because I didn’t know it was coming. It’s worth checking out in either form.