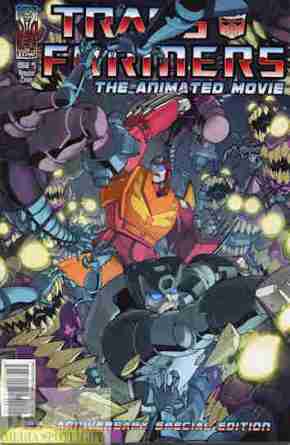 A long time ago I brought you the amazing music of Cybertronic Spree, a band cosplaying as Transformers sharing their love of 80s rock and the soundtrack to Transformers: The Movie and a few other shows. Well now they have a Kickstarter to put out their first physical album, a tribute to that movie soundtrack. If I had the money I would totally be backing it because I wouldn’t mind having it in my collection. However, I can at least convince you to make it part of yours.

With the power to light your darkest hour, front-bot Hotrod sings and plays a mean bass. Arcee is our instrument of destruction on keys and vocals. Quintesson is on triple duty, providing backing vocals, keys and wailing guitar. Devourer of worlds, Unicron, just destroys on an 8-string guitar, while Rumble and Shockwave keep it heavy on the drums with both thunder and lightning. Our resident hype-bots, Soundwave and Bumblebee play keys, dance, and keep the party going strong.

We admit, we’re an unlikely alliance and our individual motives remain hidden but we’re brought together by the power of rock and nothin’s gonna stand in our way!

None of our logic circuits could imagine that six years after our first performance in 2013, we’d be bringing the power of Transformers: The Movie soundtrack to more audiences than ever. We’ve travelled all over North America, made some fun videos, and even started writing our own songs, like Cybertronic Warrior, for an upcoming original album that we continue to work on…when we’re not rocking out, fighting each other, or both.

The truth is, we’ve been able to do this thing we love so much because of the awesome support of our fans. They are the sparks in our matrix keeping us fully functional!

What happened to Spike? Is he not in the band anymore? If you’re wondering why you should back this project here’s a few videos to convince you.

Those are cool and all but the CD is supposed to feature music from Transformers: The Movie (although adding “Cybertronic Warrior” would be nice) And of course my favorite of the Transformer movie songs is the one I’ll demonstrate here.

You’ll find other songs from Transformers: The Movie and some other cool theme songs on their YouTube channel. If that all convinces you, then head over to their Kickstarter and get “Transformers 1986” funded! Okay, one more.

That one admittedly causes bad flashbacks for Ironhide.