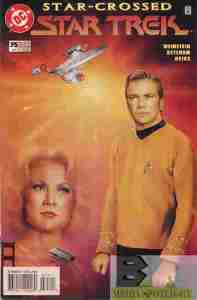 Come on, artist, give me something to work with. This would make a nice poster though.

The five-year mission is now over for Kirk’s Enterprise crew, but on the way back to Earth they witness the testing of a new warp drive go horribly wrong. Kirk wants to investigate but keeps meeting up with a stone wall. McCoy gets frustrated and leaves Starfleet and Spock returns to Vulcan, leaving Kirk nobody to turn to as they wait for the years-long refit of their ship. He continues to investigate and also takes time to visit Carol, the two…rekindling their romance seems a bit strong. Then Kirk is given the opportunity to become Admiral, which he first sees as a way to finally connect with Carol and David but ends up using his new rank to look more into the warp testing, and with Scott’s help ends up saving most of the crew of the next test. He decides he needs to use his rank to help the regular Starfleet members from within the top ranks, which may get him in trouble with the brass but definitely puts an end to his relationship with Carol and any future knowing his son.

What they got right: While it seems Weinstein really wants to be the one to write the definitive story of how things led between the end of the series and the beginning of the movies it’s hard to condemn it too much since  I’m sure other writers have taken their own shot to be “the one”. Few writers wouldn’t want that on their bibliography. As it goes this isn’t a bad idea. It keeps Kirk the same man, still working to make things better only now looking at all the behind the scenes issues he sees with Starfleet. The art is good, and in our continuing look at how Carol is drawn this is probably the most accurate (within legal issues) depiction of Bibi Besch as she would look at this time period. I guess current ages helps a bit. We don’t get to see David this go-around..

What they got wrong: I may not be able to condemn it too much but given the mistakes made in the previous issues it still isn’t going to be the definitive Kirk/Carol history or why the pieces set up as they did for the first movie. Spock just ups and leaves, believing his emotional human side has gotten in his way. McCoy’s leaving makes more sense though. However, the last page has a moment that appears to be Kirk remembering what people have said to him leading to where he is at the end of the story, a line from Spock’s goodbye message and something Carol said to him is understandable but he “hears” a line McCoy said to Carol when Kirk wasn’t around. This might have been a better final issue but there are more issues to come.

Other notes: Since I’ve tried to form a timeline with my various universes (which is admittedly difficult given that DC, Marvel, IDW, and other publishers’ stories do contradict each other at times) The numbering is going to be even more scattered than it is now. This is the tail end of Kirk’s first five-year mission but according to the solicit the next storyline takes place in the early years of that mission. Did DC do nothing to keep things straight during the second series? Was this treated like some anthology series?

Recommendation: While falling short of the definitive Kirk/Carol history it isn’t a bad attempt. It might be worth looking into.