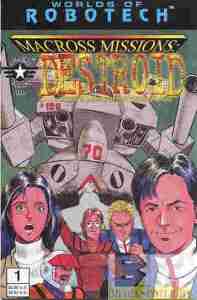 “My friend here says we have a reservation.”

“Worlds Of Robotech” were side stories apart from the main series. In this case apart from the show, but we’ll see it again during Robotech II: The Sentinels to further examine the alien races of the Sentinels. For those of you not in the know that will make sense when we finally get there.

Kenji Sato (Ken to his friends) was part of the crew of Prometheus, one of the two ships that were dragged along with the SDF-1 that now forms the “arms” of the robot mode. He’s a bit of a hotshot who gets a reality check when his team is killed in battle, leaving him and his commander the only survivors. In the next battle it’s just him, which means a future encounter with a woman named Helen Lee that he met in a bar and lied to about being a pilot. Their lives will cross again but she has a different kind of appointment with Dr. Lang.

What they got right: In the series we only get to see the fighter pilots of the RDF, mainly Skull and Vermilion Squadrons since that’s where our main characters fly in. So here’s a three issue story focusing on the pilots of the non-transforming robots that protect the ship. There is so much untapped potential there that it makes sense to finally do a story there. Ken is a bit of a jerk but he grows out of it at least partially by the end of the story. While the art doesn’t match the show it is nevertheless amazing art, even the two panels featuring the bridge crew and Lisa’s father.

What they got wrong: The timing is a bit off continuity wise. This takes place (I checked) before Gloval says “the heck with orders” and brings the ship down on Earth, but they weren’t in orbit long enough for Ken to enjoy it. There are also times when the word balloons are hard to follow and I can’t get a good sense of the future dead people’s voices. Just Ken, Helen, the commander (who is one of the future dead people admittedly), and one of the pilot’s wives.

Recommendation: Shaky at points but overall a good start. The next issue comes after a quick return to The Macross Saga and will be the beginning of a two-issue miniseries.