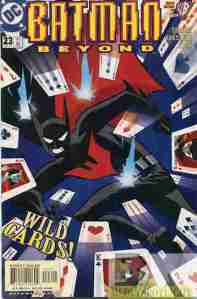 Terry isn’t happy about spending a day with his family after he hears about the Royal Flush Gang recruiting. This gets him in trouble with his mother but he also has to get Ten’s help in finding this new gang. Jack has declared himself the new King, which doesn’t sit well with the old King, who rats out one of the hideouts they found after Ten left to reform. With her help Batman brings the Gang down and after a conversation with Bruce tries to make up for flaking during the “family day”, inviting Bruce along because he’s become family. (If only he knew and boy do I not like that revelation.)

What they got right: I kind of like seeing Melanie as a crimefighter. Maybe she could become Batgirl Beyond someday? Maybe? Please? It’s not like Max is ever going to put a costume on. We also get a nice moment at the end where Terry tries to make up for his mistakes and forms a stronger connection to Bruce.

What they got wrong: This could just be me, but the theme of family feels like it’s just barely there but not quite connecting for some reason. Maybe with a bit more time to establish the theme it could have worked? They also don’t mention the tie-in comic idea that there’s a set of twins and nobody thinks to mention Ten’s aunt and uncle, who once tried to take over the roles. It’s not canon to the show but it is canon to the Adventures tie-in continuity.

Recommendation: A good story that’s worth looking into, even the theme doesn’t quite connect.