The Many MANY Intros Of Transformers: G1 Japan part 1 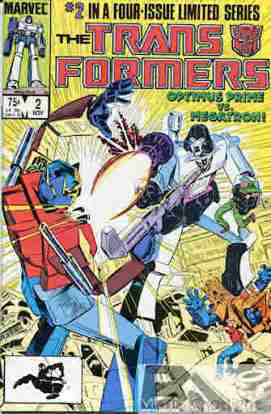 The Transformers as a series concept comes from Hasbro and Marvel comic creators in a joint venture that worked with the G.I. Joe: A Real American Hero line. However the toys come from Japan, primarily licensed from various Takara lines. You can find that info rather easily but someone there liked the concept enough that they re-release those toys themselves as Transformers, or rather “Fight! Super Robot Lifeform Transformers” because Japan like to make sentence length titles for stuff whenever possible. This also included bringing in the shows, already produced by Toei for Marvel Productions and Sunbow, to their TV screens. They aired all of our shows and when for whatever reason Hasbro opted to end the series Takara made their own shows, taking the Transformers concept in their own direction. I’ll get more into that in part 2.

For this part I’m focusing on the intros for the shows brought over from the US as well as two shows featuring the classic G1 characters in their designs. This will also give you a taste of the altered concepts since two of those shows are Japan original but feature the Autobots and Decepticons we all know and love. Except over there they changed the faction names to “Cybertron” and “Destron” respectively for some reason. The planet was thus named “Seibertron” (although some Japanese sources still call it Cybertron so who knows?) and all the Autobot and Decepticon related spin-off factions, as in Maximals, Predacons, and I believe the Vehicons used those names. I’m going to try to unconfuse that as much as I can but we’re only worried about Japan’s take on Autobots and Decepticons right now. This first set of intros focuses on the characters most of my readers know best, like Convoy, Rodimus Convoy, and Megatron. Look, I’m sticking with US names describing these shows just to avoid any more confusion than we’re already getting. Let’s just start the first intro.

I can’t really find a version of this with subtitles since the G1 shows were never translated from Japanese for obvious reasons. (And for those of you who can’t grasp the obvious I mean the show was created in English.) So for most of this section I’ll be adding translations from the Transformers Wiki. The intro song for this series was “Transform” by Satoko Shimonari, who also did the closing credit but I’m focusing on the intros here. If you guys want me to go over the Japanese closing credits let me know. They do more than show clips of the Transformers transforming, but this page is going to be full of videos as it is.

Yeah, the Engrish is a bit off and in the English lyrics in the video “mysterious” is spelled wrong. Otherwise, what it lacks in describing the overall plot it makes up for some serious action music. I could see it as a battle theme or just drawing people in. There are two things worth noting behind the scenes, one of which you can see here. The Japanese intro is slightly longer than the US one. According to the Transformers wiki they didn’t get a good deal with this plan. The Japanese show took that time out of the episode. Their airing was also a combination of seasons one and two and to fill the episode count they created their own clip shows. Considering our other running discussion about dub versus sub I wonder if the pro-sub side would defend these changes?

Anybody who knows anime knows that often a show will change their intro to reflect new casts or other changes to the status quo in relationships they didn’t already spoil with the last intro. Usually that involves changing the theme song as well, but that’s not the case for the Transformers intros, at least in this period. Check out the second intro for Fight! Super Robot Lifeform Transformers.

This one adds in bits from the second intro as well as clips from both shows. In fact both intros seem to use the same clips Sunbow used for the closing credits as well as chopping up the US intro. As longtime readers of the usual intro review series “My Favorite/Not-So-Favorite Intros” here at BW know I get disappointed when I see clips from the shows being used in an intro rather than original animation but will restore a few points if it’s done well. There’s no story to a lot of Transformer intros in either country but the visuals do not offer a lot of excitement compared to the US ones. Granted it could be just my familiarity given that I’m just watching images I recognize set to a new song I can’t understand. It’s more like watching a fan video for me.

Then we get to US season three, which they did make a different show seeing as it means a change in time period. Set after the events of Transformers: The Movie year of 2005 season three takes place in 2006. Not having the movie in Japan I still don’t understand why they jumped to 2010 unless they just really like round numbers and thought 10 was better than 5 or something. The new intro is simply called “Transformer 2010” (very imaginative intro titles, eh?) and performed by Shō Hirose.

So apparently they took the same easy route as seasons four and five of the US run and just slapped together advertisement animation and a bit of the movie animation (which must have come from a US ad because I remind you it was years before Japan got to see the movie). That’s disappointing. We will see in later shows dubbed from the US runs that they did actually create their own animation but not in the G1 shows they brought over. Oh, speaking of that and our other continuing discussion, another problem US fans have with older anime is that a show will be dumbed down for the kiddies (as they see it at least) or have unnecessary narration tossed in when we can see what the narrator is telling us is happening? Well guess what the G1 Japanese dub of the US show did? At least according to the fan wiki. And this won’t be the last time they pull that on this franchise. Wait until we get to Beast Wars. They also claim the Japanese versions actually drop episodes, which you’d think would lead to less need for a clip show if they kept them in. As for the song translation:

The color of the wind changes, the world turns
It’s very likely that this blazing sunset is now our future
Looking for anyone who will remember
That there’s only one universe!

A new tomorrow morning
will surely come
It’s likely this battle is the future
For peace, a Cross of Heat
For the cosmos, a Burning Heart
Dash Dash Dash Dash
Trans Transformer

I can’t say this one is nearly as impressive. It sounds like a rambled weather report, something about fighting, and “Transformer” stuffed in at the last minute, like they just remembered what show this is for. With a lot of Japanese theme songs I sometimes get the impression that they have some random songs lying around in a bin somewhere they just slap a name into and call it good.

So what did Takara do when Hasbro stopped making shows? I told you in the intro, they made their own. Transformers: The Headmasters is the last full show that features any of the G1 cast we know, although still using their Japanese names. The series ignores “The Rebirth” (which they eventually got with huge translation errors as Transformers: The Rebirth) in favor of a concept closer to Japanese ideas of robots being piloted mecha. The theme song is “The Headmasters” (the creativity continues) as performed by Hironobu Kageyama. This one actually features new animation because they pretty much had to. And this one we have subtitles for!

They’re close enough to what the wiki says the lines are so good. This highlights the changes in the cast. The post-movie 2006/2010 Transformers are here but so are the new kids on the block, the Headmasters. They slowly take the spotlight away from the old cast and as the show went on supplant them outright. We’ll see this again next time in Masterforce when they create a new cast, and still manage to revolve casts. We even see Chromedome rescue an injured Rodimus. (Yes, Hot Rod becomes Rodimus Prime when Optimus dies…again. Apparently you can’t have a Transformers series without your Optimus Prime dying at least once.) The theme song is the same generic dialog with “Transformer/Headmaster” stuffed in there but visually it’s very nice. Although they do spoil Blaster (named Broadcast in Japan) becoming Twincast but only so far as he’s a blue repaint of Blaster.

We also see that the little robots turn into heads, but unlike the US version in Japan the robots are the Transformers, linking to larger robot bodies called “Transtectors” which they operate like mecha. I like the US version better. Whether the heads are robots or people in exosuits/cyborgs (cartoon/comic) you have two minds working together to fight, the usual Transformer doing the fighting while the Nebulan plans strategy without as much distraction. Seeing as Firestorm is my second favorite DC Comics superhero you many notice a trend.

There is one finally appearance of the main cast (not counting cameos in future series) and we’re ending up leaving where we came it. Scramble City: Mobilization takes place between the events of the first and second series (or between seasons two and three), and tells the origins of Metroplex and Trypticon…whose origin was actually given in “Five Faces Of Darkness” so that was pointless. The special also highlights the Combiners that can switch limbs with each other and with other Autobots and Decepticons, a feature never really played up anywhere else. For whatever reason Toei refuses to let their original video animations (OVA) out on home video which is why Shout Factory wasn’t able to bring this or Transformers Zone to the US despite getting all of the TV shows. I don’t know why. Anyway this video (unless it goes away and I have to use a different one) translates the lyrics but it’s just “Transform” again.

And it’s also just reuses of the US intros with clips again. I’d defend this if it was catching up fans of the first show up to the events of the OVA but it isn’t. It just parts of the US Season two intro and some clips from “More Than Meets The Eye”. I’m not impressed. The least lazy thing about this intro is the fan that translated it. However, that’s all the productions with the casts most of us know. Next time I’ll go over as many of the completely new casts and complete the G1 round of the many, many intros of The Transformers.