I actually picked this up when it first came out but for whatever reason opted to wait until the whole miniseries came out. The only one I ended up being able to get was issue #5 so it never got reviewed. I still have them somewhere so if I find #5 I’ll review that knowing I’m missing everything in between. This issue is just next in the comiXology library rotation. 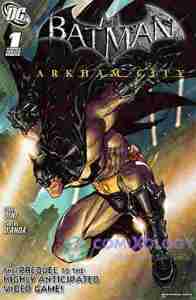 “Maybe I should just buy a parachute?”

The prequel to the second game in the Arkham franchise (I would like to finish the first but for some reason it doesn’t like my PC game controller), the Joker is dying thanks to the Titan drug, some of which has fallen into the hands of the Trask siblings, who have boosted themselves, under the instructions of a man who is also the “therapist” of Mayor Sharpe (the former warden from Arkham Asylum). Batman seeks info from Two-Face and tries to stop them from killing the mayor and Commissioner Gordon, but they’re also rigged to explode, destroying the new city hall and killing a number of counselors. Sharpe uses this to convince them to create a whole section of Gotham City, dubbed Arkham City, to contain the supervillains, but Batman knows something is rotten.

Continuity is a bit hard to figure out. I can’t play Arkham Asylum because the keyboard controls are a bit wonky and for some reason the forward and backward get reversed with my controller (I looked this up online, it actually is a problem with the game not liking the model controller I have–just another reason I don’t like Logitech equipment) and I’ve never seen more than the first few minutes of gameplay for Arkham City. I will say the art is nice but for some reason I couldn’t hear the character voices (the ones I know) when I was reading it. That could be on me though, which is unusual for me.

Overall it’s a good start to the story, but I don’t know if it fits properly into the game’s story or not. It might be worth looking into if you like the games or just want an alternate Batman story.