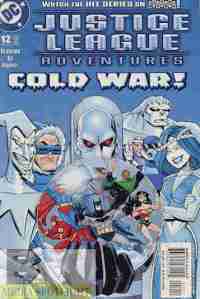 Someone beat Super-Team Family to this crossover.

A group of the cold-themed villains gather together to call themselves the Cold Warriors (roll call: Minister Blizzard, Icicle, Killer Frost, Mr. Freeze, Snowman, Captain Cold, Cryonic Man, and Polar Lord) take over an African nation, making the people think they’re doing them a favor, and are even able to chase off the Justice League with Polar Lord’s “cold wave”. However, Polar Lord isn’t just the new guy, he’s secretly in charge…and a villain from space named Eklu using the villains to soften up Earth for an invasion. When he betrays the “Cold Warriors”, the Justice League manage to convince them to help push back Eklu’s forces and defeat them. But at least all that melted ice solved the country’s drought problem.

What they got right: With so many cold-themed villains in the DC Universe it makes sense to have them team up in a superhero team-up book. I didn’t even know about Cryonic Man (who was a one-story villain before he was killed), Minister Blizzard, or Snowman but I heard of Icicle. It was a nice nod to old DC even if not everyone is around in the DCAU or even the DCU of the period. General Elku is a good one-shot threat bringing them all together and using both the citizens and the villains.

What they got wrong: The Justice League continue to bicker and Batman takes another shot at the Flash. At this point I’m wondering why he even sticks around in this version. Also, Killer Frost shouldn’t be affected by Superman’s heat vision given that her power is less creating cold and more absorbing heat, which just results in freezing everything around her. Also the writer seems to think the only difference between DCAU Mister Freeze and the Joel Schumacher version is that DCAU Freeze is better at the constant ice puns.

Recommendation: A good story and a nice concept. Worth a read.