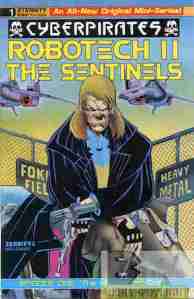 Heavy metal? At an airport for fighter jets? No, really?

On Earth they’re preparing for the possibility that the SDF-3 mission to Tirol won’t lead to a peaceful settlement with the Robotech Masters unaware that they missed them and and are now dealing with the Invid alongside other aliens. A test flight of the new Alpha model results in an accident, but it was no accident. Someone is trying to take control of the prototype fighters and wasn’t successful, the crash taking the life of Terry Weston’s fiancé. After a period of mourning it’s his turn but this time the bad guys are more successful and Weston finds himself unable to stop his fighter from destroying an apartment building, luckily with no loss of life. However, like with his fiancé’s fighter they can find no evidence of what went wrong, and it’s easier to simply make the pilot a scapegoat.

What they got right: Between Eternity and Academy we know writers want to play in those long periods between stories to focus on other people during that war or in the peace times. The set-up for this one isn’t bad, since Spangler (who also worked on the Return To Macross time period prequel stories) likes to have humans (or they may have some Zentraedi mixed in, I don’t know yet) messing with the RDF. It is the start of an interesting mystery. Nice name drop of Jack from the main series.

What they got wrong: If you really don’t care about humans causing trouble when what’s left of humanity and a few war-weary Zentraedi are trying to rebuild the Earth then you might not get into this story. That’s not so much “wrong” as just a matter of preference for your Robotech.

Recommendation: It’s not a bad start to the story and might be worth looking into if the miniseries pans out. I don’t know if I have the whole thing so I’m only judging by the first issue.