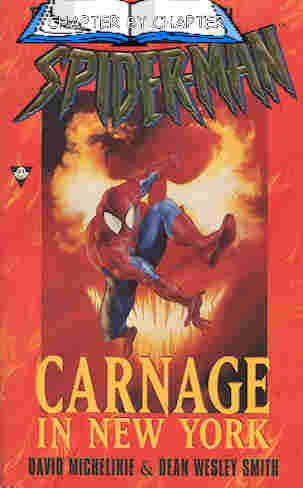 Last time Spidey goofed up but you can understand his perspective on things. Dudes in strange outfits hunting some scared guy happens at least once a month for him. Tonight’s chapter is a bit short and focuses on Carnage. Since I already went over his history in the reveal and last chapter I think we can just move on. 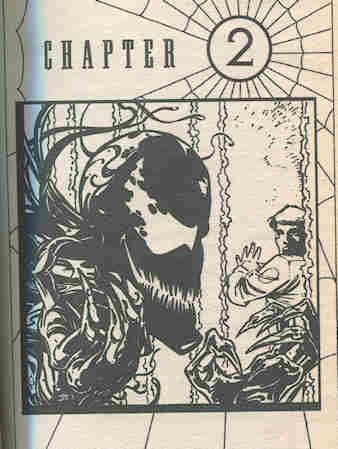 Black and white really doesn’t help Carnage, who should be red. It makes him look too much like Venom.

This chapter takes place in the Vault. For the uninitiated that’s the prison in the Marvel Universe designed to hold super-powered supervillains, or on occasion ones with enough skill to get out of a regular prison. Of course places like this and DC’s Arkham Asylum are just there to have the villains escape while realizing how stupid it is to put someone in the Rhino’s class in a normal prison. Or someone like Carnage. The chapter goes over all the different safeguards that exist, like no trees to climb up on, windows surrounded by flamethrowers (presumably tailored to each villain–symbiotes hate fire and certain loud noises), and a force field which they actually refer to as “electric fire”. Plus each cell is guarded inside by two Guardsmen, who wear armor designed by Tony Stark (just not as good as his Iron Man armor, and the chapter does note that Tony built the armor for people who may not know a lot about Iron Man prior to the Marvel Cinematic Universe.

One of these Guardsmen is a bully and decides to have some fun taunting Cletus, because in his regular form Cletus Kasaday is a lanky type guy. Cletus is also a bit nuts and doesn’t really react to the man’s taunting, though the other guard is starting to get sick of it. Carnage is not the type of villains you should be putting a rookie Guardsman on but apparently that’s standard procedure. It’s a rather dumb one as shown when Cletus cuts himself with his fingernail to let the symbiote out from inside him (Venom’s symbiote changes into clothes but Cletus and Carnage have a stronger bond than say Venom and Eddie Brock) and the bully pretty much craps himself. Even his partner doesn’t feel sorry for the jerk as he sends him to switch with one of the smarter guys outside the door, even responding to Carnage throwing the “wimp” taunt back at him with “more like idiot”.

This whole chapter is designed to highlight Carnage. He appears to be a thin, wimpy guy but he was already a deranged serial killer before bonding with the symbiote and becoming Carnage. As Carnage he’s even more dangerous and freaky to the point that he ends up scarring the tough guy bully who had been taunting him for fun despite the warnings of his fellow guard and I would assume the fool who assigned him to this cell. Maybe it’s their way of letting the new guys know what they’re in for and why they’re wearing low-grade Iron Man armor in the first place. It shows that he’s dangerous even inside the cell. So what happens later in the story when he gets out? The next chapter seems to be focusing on Peter and Mary Jane according to the chapter art so we’ll have to wait for that but next time we get to remember when the Parkers were a happily married couple.